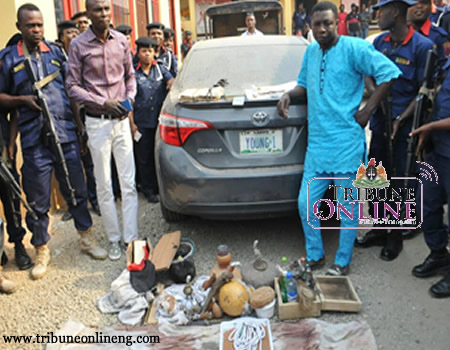 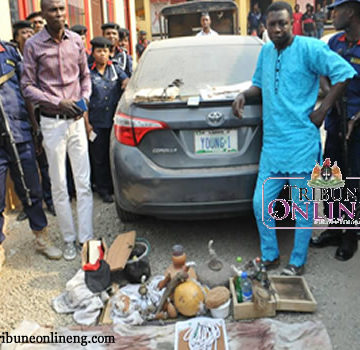 Parading the three suspects in Akure, the State Commandant of the NSCDC, Mr Pedro Awili Ideba, said the three men also involved in advanced fraud, saying they had duped unsuspecting members of the public.

He listed the suspects to include: Oladele Ayuba from Ilorin, Kwara state, Abiodun Oluwaseun and Jayeola Tosin who have been operating between Ondo and Kwara state.

He said Oladele Ayuba who claimed to be an Islamic cleric involved in advanced fee fraud and obtaining under false pretence.

He said many people who visited him for prayers had been duped of various amounts ranging from N300,000 to N36 million but he said the cleric was arrested following a complaint by one of his victims.

According to him,  one of the cleric victims,  Tajudeen Ekundayo who lost N4.3m to the cleric lodged complaint at the NSCDC office,  saying his men swung into action immediately and arrested the man who is the kingpin of the syndicate in Arigidi Akoko

He said other members of the syndicate who perpetrated criminal activities such as kidnapping, ritual killing and fraud took ran away but said the security operatives have been on their trail.

The NSCDC commandant disclosed that the traditional ruler of the town,  Arigidi Akoko,  Zaki of Arigidi has written a letter to the state command about the criminal activities of the men saying criminal activities such as kidnapping, ritual killing and fraud had been traced to them.

The NSCDC boss said some charms and a car were recovered from the suspect.

He said the suspects were arrested after using N24,000 fake N1,000 denomination to buy goods from one provision seller.

He said the woman reported the case to the State command and the men of the Corps trailed the suspect and arrested him while others are still at large.