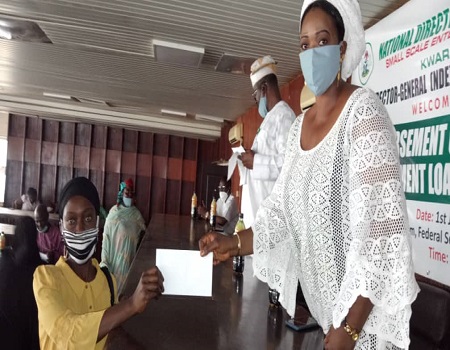 The National Directorate of Employment (NDE) in collaboration with the women wing of the All Progressives Congress (APC) in Kwara State on Monday disbursed soft loan to 160 micro and small scale entrepreneurs in the state.

Speaking at the event tagged, Micro-Enterprise Enhancement Loans Scheme, the state coordinator of the NDE, Builder Adeyemo Gabriel Ademola, said the scheme aimed to care for and empower the vulnerable group in the 16 local government areas in the society.

“We realise that majority of these people don’t even need up to N5,000 to start up their businesses. It is what they are able to sell a day they take as their business. What we do is to enhance their business with a soft loan of N10,000 so that instead of them going and coming back from the market on daily basis they can stock their warehouse for up to three days before going back to the market. That will reduce the cost of transportation and by doing that they are improving on their businesses.

“What we did today is in conjunction with the APC women leader in Kwara state, Hajia Abolaji Ramat Olaide. The mode of selection is through the APC woman leader. She helped to identify the vulnerable group for the empowerment. Ordinarily, she has saved us the rigour of looking for those in that category. Since they are closer to the people that is why we go into partnership with her to identify the vulnerable those who really need this empowerment.

“The major problem we normally have in a programme like this is the ability to identify the target group. If you make the mistake of selecting the bad ones, then the programme is a failure.

The NDE state coordinator, who said that ability of the beneficiaries to pay back would enhance further empowerment, added that “we have other facility of N50,000 and N100,000. We want to see that they are able to manage this one before we graduate them to higher loan.

“Our advice is for them to manage the money very well. They should not increase their taste now until when they are buoyant enough to do that. Their focus should be how to improve their economic base, how to improve their daily income so that their lives will be better,” he said.

He also urged them to study their markets to know what buyers need, saying they will sell better when they provide what people need.

Also, speaking, the APC women leader in the state, Hajia Abolaji Rahmat Olaide, said the programme is all about women empowerment.

“We thank our president for recognising us because he knows the impact of women during the campaign and the election. Almighty Allah will guide him too and our DG and the ministers. We really appreciate their efforts about the women. The women should not see the money they gave them as little. Money can do more in our lives. They should not misuse the money given to them by the president,” she said.

BREAKING: FG relaxes ban on religious gathering, curfew now from 10pm to 4am