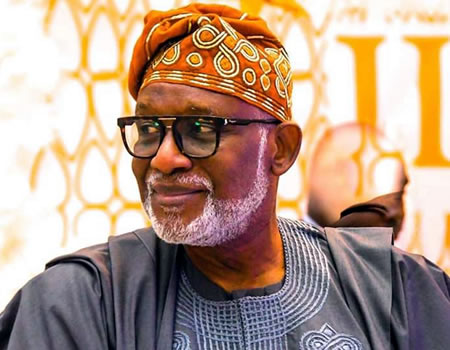 The Ondo State House of Assembly, on Tuesday, debunked the rumours that it has concluded plans to impeach Governor Rotimi Akeredolu over the discovery of the N4.3b stashed in a third-generation bank.

The Chairman of the House Committee on Information, Hon. Olugbenga Omole, who made this known in a statement by him after the Parliamentary session, said the clarification became necessary following rumour that the House had concluded plans to remove the governor over the secret bank account saga.

He maintained that there is a robust relationship between the lawmakers and Executive arm of government, noting that the rumour was designed to cause disaffection between the two arms of government.

Omole who also denied the report that the residential quarters of the Speaker of the House, Hon Bamidele Oleyelogun, was under siege, said the security operatives were at the venue to maintain peace, law and order.

He said ” there was no plan to commence impeachment moves against the Governor, Arakunrin Oluwarotimi Odunayo Akeredolu.

“There is a robust relationship between the Executive Arm of Government and the Legislature; whatever has been planted in the media in recent times are the handiwork of fifth columnists

“That the news making the rounds that the Speaker’s Lodge was under siege is a hoax and the imagination of those behind it.

“The lodge was never under siege. The armed Policemen sighted they were at some distance away and were there to maintain peace, law and order.

Omole warned the elements behind the act to desist from setting the state on fire.

Speaking on the N4.3b in a secret account with a new generation bank, Omole said “On the issue of the N4.3b under scrutiny, all relevant documents should be submitted to the Committee on Public Account and Committee on Finance and Appropriation respectively”

He, however, warned that “no member of the House of Assembly should talk to the press without making reference to Mr Speaker.

“The only person authorised to speak on behalf of the House is the Chairman, House Committee on Information”