Features
By Yejide Gbenga-Ogundare On Jun 26, 2020 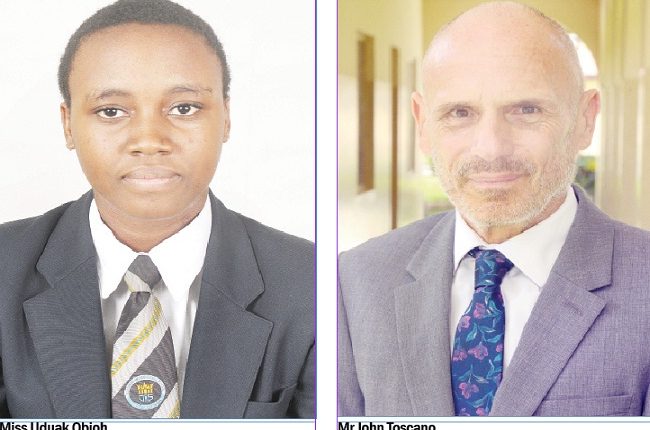 “The one who works diligently while utilising his God-given core gifts to the hilt is already assured of success in its entirety.” These words by Leandro E. Pasamba from the Philippines best describe the laudable feat accomplished by a 16-year-old student of Olashore International School, Iloko-Ijesa in Osun State, Uduak Obioh, as she flew the flag of Nigeria among other countries of the world with her academic prowess in mathematics.

Uduak made a stunning achievement by getting the overall best result in the world in mathematics in the October/November 2019 Cambridge IGCSE examinations. Indeed, she proved the saying that success doesn’t come when your hands are folded in your armpits but through hard work, determination and confidence by scoring 100 per cent in the Cambridge IGCSE mathematics examination.

She has been confirmed by Cambridge Assessment International Education through the British Council as the top in the world for the 2019 November Mathematics examination and she further scored six A’s in the examination.

This feat did not come as a surprise to her school management as the school principal, Mr John Toscano, described her as one of the best in her set, adding that, “she is a very determined student who is absolutely single-minded in pursuing the goals she has set for herself. She is also very independent in the way she thinks; she thinks a lot about what she is learning and asks very searching questions in her quest for understanding.

“She admitted to me that she found parts of the mathematics paper quite difficult but it is a tribute to her determination that she persevered during the examination and ended up getting everything right.

“Uduak has always been one of the highest achievers in her year group but has faced a lot of competition for some of her high-achieving peers.

“What has made her really stand out is the discipline she brings to her studies and the relentless focus she has on achieving the very best for herself,” he said.

Mr Toscano, however, admitted that though the school expected her to do very well, they never expected it to be as well as she did. He said through her mathematics teacher had predicted she might get 100 per cent, they were still amazed when her result was announced.

“Although Uduak was the standout performer in the IGCSE exams, our students did extremely well across the board, both in mathematics and in other subjects; 29 out of 30 students passed mathematics,” he said.

On her part, Uduak said she feels amazed to have received the award because it was beyond her expectations.

She said, “Being top in the world was not part of my original goals; my goal was to be top in my school and if possible be the top in Nigeria. When I saw my result, I knew there was a possibility that I could be the top in the world but I never really dwell it on it so the award really came as a surprise to me.”

On her preparation for the examination, Uduak said “mathematics is a subject that most students don’t really like and it’s not because they are not capable, it’s because a lot of people believe mathematics is difficult, but I believe that mathematics is not difficult and it’s maintaining this state of mind that has helped me to pull through in achieving what  I achieved and also the effort of my teachers and their fantastic teaching techniques which are good enough for me to fully understand each topic and to fully solve questions on my own afterwards.

“Another factor that also helped me achieve this was my studying technique which mainly includes solving past questions; it exposed me to the way questions are set and the way they are meant to be answered. My goal, which was to be the top in my school, was a motivation for me. My studying technique helped me a lot. It exposed me to a wide spectrum of questions. It gave me an idea about how questions are meant to be solved, and this is not limited to mathematics alone, it is also applicable to other subjects.

“Another important thing is being confident in yourself, not being dependent on doing things the way others do theirs. You need to have your own unique way of studying. That way you can comprehend what you are studying.  Another thing is that we should not be stressed; we should try to maintain a relaxed state of mind. That way, our brain is able to work with full potential and without distraction from other things.”

Speaking on how the school prepared Uduak and other students, Mr Toscano said “at Olashore, we run a six-year programme of mathematics for our students. We feel that it is something every student can do and we try to make the subject accessible to them. We aim to build their confidence and proficiency in the subject, not prepare them for the examination. The examination preparation starts towards the end of Year 11 and gradually becomes more intensive as the finals approach but we try to teach students to think for themselves and learn to solve problems, rather than try to rote-learn solutions to problems. Uduak is the perfect example of a student who has benefitted from this approach, but we have had many other very strong mathematicians graduating from school.”

Uduale said attributed her success to the support of parents and her school especially her mathematics teachers.

She said “In 1675, Isaac Newton wrote a letter to Robert Hooke and I quote ‘If I can see further, it is because I am standing on the shoulders of giants’. In my case, I will say my giants are my families, most especially my parents who continue to be high achievers. I know it is lots of pressure here but also it keeps me on my feet. My mum always says my starting line will be her level and I have not even started until I have achieved what she has achieved. This keeps me motivated throughout.

“Also I appreciate the efforts of all the teachers who have taught me throughout my years, especially my mathematics teacher, Mr Akhaine, who throughout my IGCSE classes kept telling me ‘Uduak, you can get a 100’. I am honoured that I was able to be taught by him. I have achieved this and I am glad I have made him proud as well as all my other teachers.  I can only thank them.”

As a budding mathematician who has created a record, Uduak has great plans for her future. She has applied to study Electrical and Electronics Engineering but her ultimate dream is to be an automobile engineer.

She said, “In the world today, mathematics plays a huge role in the development of science and technology and will continue to play an even bigger role in the future. Although I am not studying mathematics as a course, it will still play a huge part in my future and my career.”

And what plans does the school have for her considering how her result has proved the mettle of the management? Mr Toscano said, “Unfortunately, COVID-19 has curtailed our options for celebrating this result but we will certainly make a special presentation to Uduak when the opportunity arises. We are exceptionally proud of her.”

It is, however, not a matter of being forced to live a life focused only on books as many thought, Uduak said, “In Olashore, students are encouraged to take part in extra-curricular activities in the school. When I joined the school in 2014, I joined the school orchestra, I learnt how to play the guitar but I left in senior school so that I could have time for other things. The school has a wide variety of clubs so you are expected to join one club and you can also change your club after a year if you want to.

“My first year, I was in Home Makers Club. I moved to Board Makers Club before I finally moved to Photography Club, which I can say is my favourite club of all. I also took part in a chess competition. We have a quiz debate and public speaking programme, I majorly participate in the quiz session of the programme. Also, every student is expected to take part in sporting activities. My favourite sport is basketball but sometimes I play badminton, I have represented my house in badminton competitions. We are expected to participate in athletics also. We have a road race, that is compulsory and it is once in a term. There is the OIS race and individual race.”

In her assessment of her school, she said that the school curriculum is not too focused on academics but extends to co-curricular and learning beyond the classroom, adding that “the school also has a leadership programme which I will say is top-notch. Every student in a year group takes part in the leadership programme. Every year 11 student is expected to take part in a leadership project which is meant to serve as a project that will benefit the community.

“The project teaches the students skills like planning, budgeting, time management, interpersonal skills and many other skills. The school started a blended learning and technology programme which is very good. It mixes the traditional learning system and infuses it with technology because we are in the digital world and technology is a huge part of our world now,” she concluded.

Uduak is indeed proof that with determination, there’s no feat impossible to achieve.