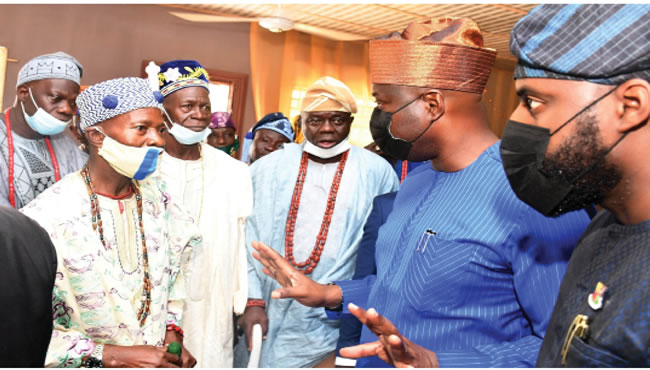 Early in January, a torrent of bad news started emanating from the Ibarapa axis of Oyo State. The stories were about kidnapping, attacks by killer-herdsmen and destructions of farmlands across Ibarapaland.

Incidentally, those attacks were on the heels of the alarm earlier raised by Governor‘Seyi Makinde when he declared in Saki, a key town in Oke Ogun axis of the state in December 2020 that some criminal elements were crossing the international borders into the forests around Oke-Ogun and Ibarapa. He said that the state would not allow criminal elements seize hold of the state and terrorise its people.

Though the state had deployed a combined team of state actors and non-state actors to comb the forests, reports of herdsmen attacks and violence kept emanating from Igangan, Idere, Ayete, Lanlate, Tapa and parts of Ibarapaland.  On January 9, in the aftermath of the killing of Dr. Fatai Aborode and a business woman of note in Ibarapa, the Oyo State Security Network Agency codenamed Amotekun, embarked on a joint exercise to rid the forests of Ibarapa North, Ibarapa Central, Ibarapa East and Iwajowa Local Government Areas of criminal elements. That exercise brought together the Vigilante Group of Nigeria, Amotekun Corps and even Miyetti Allah Vigilantes and it marked the return of normalcy to the troubled area.

A government delegation led by Sunday Odukoya, Executive Assistant to the Governor on Security was deployed to ascertain the true situation and ensure peace.

As the bad stories won’t go away, the governor again on January 24 deployed the retired Commissioner of Police in Lagos State, Fatai Owoseni(rtd) accompanied by the Commissioner of Police in Oyo State, Ngozi Onadeko, to the troubled areas. The delegation, which held meetings in Igangan, Ago-Are and Tede in Ibarapa and Oke Ogun axes, insisted on the need for peaceful coexistence aftermeetings with monarchs, youths, and Hausa-Fulani leaders.

At the meeting in Igangan, Owoseni debunked insinuations Governor Makinde had abandoned the people, adding that at least 51 suspected perpetrators of kidnapping, rape and banditry are currently in police net. He emphasized the need for vigilance by all, saying “If you see something, say something.”

On Sunday, January 31, Governor Seyi Makinde launched a peace/fact-finding mission to the troublespots of Ibarapaland.  It was a two-day trip that afforded him the benefit of hearing directly from different layers of stakeholders and seeing the extent of the crisis first-hand. The trip also afforded the governor the opportunity of combining investigation with consultation, while he made critical declarations at the same time. He was able to silence those who criticized his style of first receiving detailed briefing before embarking on the all-important trip.

At the meeting held at the Igbo-Ora home of the chairman of the Oyo State Water Corporation, Dr. Anthony Adepoju, leaders of Ibarapa community took turns to brief the governor on the extent of the crisis.

Hon. Okediji Daniel Olusegun, chairman, Ibarapa North-West Local Council Development Area told the meeting that the displaced Seriki Fulani of Igangan, Alhaji Saliu Abdukadir, was the source of the tension that had grown between the Ibarapa people and the Hausa-Fulani, as according to him, the said Seriki was linked to series of infractions. Others who addressed the meeting included Olaoniye Sarafa (Ibarapa Central), Diji Odegoke (Ibarapa North-East), Adekunle Waheed (Ibarapa East), Gbenga Obalowo (Ibarapa East), Shittu Liazu (Ibarapa North).

A common thread that ran through their submissions was the fact that crisis rocking Ibarapaland started around 2007/2008 and that the Fulanis started coming to the area in numbers with the claim that they were invited by others who told them there is abundance of land in the area and that there was peace.

The community leaders said that things took a sad turn when some of the Fulanis graduated from ordinary vandalism of farmlands to attacking farmers, kidnapping, rape, and killings. The leaders said that the attacks became vicious from March 2019 and that different communities in Ibarapaland have altogether paid in the region of N50 million as ransom for kidnap victims.

Odegoke, chairman of Lanlate LCDA said that the attacks were already scaring agricultural investors from the town. He said: “We have since July 2020 put a hold on receiving Fulani visitors and with that decision, peace is returning to our area.”

The governor was told that the killing of Dr. Aborode, a well-known farmer and philanthropist and some business owners in Ibarapaland angered the people and led to the ‘Fulani must go’ slogan.

Besides the Igbo-Ora meeting at Adepoju’s residence, early morning meetings were held at Igbo Ora town hall, Idere and Igangan. The governor equally visited the homes of victims of attacks by the killer herdsmen including the home of the slain Dr.Aborode.

While speaking at Igbo-Ora, the governor told the gathering that he felt their pains, adding that a failure of intelligence partly informed the inability of security agencies to nip the criminal activities in the bud.

“We regret the loss of lives of our compatriots who have been cut down in their prime and the thing is that we must not lose any more lives,” the governor said, adding that community leaders should request to see him as quickly as they want it once security matters are concerned.

At Idere, the stakeholders, who were largely traditional rulers gave historical perspectives of the crisis and asked for another meeting in Ibadan where they can speak with Makinde in close quarters.

The governor said: “You are central to the security situation. I have implicit confidence in the traditional rulers and chiefs. We do not want war and we do not want to jeopardise the lives of our people in different parts of the country. Rest assured that I will continue to do my best for the people of Oyo State.” 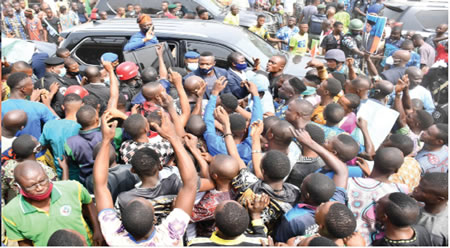 At Igangan Town Hall, the governor met with youth leaders, the elderly and monarchs who narrated the tales of woes that spanned more than a decade. General Secretary of Farmers’ Union, Taiwo Adeagbo said that he once in 2013 took some 14 victims of herders’ attacks to the immediate past government of Oyo State but that succour did not come. He said that activities of the killer herdsmen could threaten food security.

Jamiu Ogungbenro, of Igangan Development Advocates, listed a number of victims of kidnapping and the ransom paid.  Others lamented the terror the killer herdsmen had inflicted on the people in the past years and declared that enough was enough.

After listening to the tales of woes, Governor Makinde declared the readiness of his administration to fast-track the State’s Identity Management Scheme and set up peace and security committee in all councils. He also told the people that the state would compensate families that lost loved ones even though no amount of money could equate the lost lives.

He also announced that the state government would immediately takeover the treatment of the three victims of herders’ attacks who were being treated in Igangan besides the deployment of more Amotekun corps to man strategic spots.

It is worthy of note that three victims; Isaiah Seun, 26; Emmanuel Aderogba, 71 and Adekola Adeyemo, 65, have already been relocated to Ibadan, where they are receiving medical attention courtesy of the state government.

“The take-home from the interaction for me is that it is a collective problem and I can see the commitment from everybody to find a solution to this.

“And, at least, I am quite glad that some of the initiatives that the government is trying to put in place to stem insecurity are coming to fruition.

“We will ensure that our identity management programme takes off as quickly as possible. We will also ensure the setting up of peace and security committee that is all-encompassing in the councils.

“So, this is also to let people know that I feel their pain, because I have had a very close interaction with Dr. Fatai Aborode in the past. I commiserate with his family and many others who have lost loved ones to this situation.

“I feel the pain and I believe that with everybody coming together, we will be able to tackle the problem.

“Also, political office holders need to know that when they see something, they have to say something.”

On the enforcement of anti-grazing law, the governor declared that such is an area where state police would have helped.

He said: “Quite frankly, the governors are at the mercy of federal security agencies to implement certain laws.

“That was why we asked for State Police. In the first instance, it is a constitutional issue and, in the absence of having that, governors in the South West came together and formed Amotekun as a stop gap.

“Problems don’t go away completely. But you have to keep working at it; keep pushing to get to where you really want to be and that is what we will keep doing.

On the deployment of additional Amotekun operatives, the governor said: “The 200 Amotekun Corps have been deployed. They are here and we are also supporting them with logistics by bringing four additional operational vehicles for them.”

To the stakeholders, the trip by Governor Makinde was eventful and result oriented.  In the words of the Olu of Igbo-Ora, the governor only needs to sustain the security strategy he put in place 15 days ago.

The monarch said: “In the last 15 days, the governor has put in place a security strategy. From that time, we have not witnessed kidnapping and we want you to help us to further strengthen that security architecture to ensure that the peace endures.”