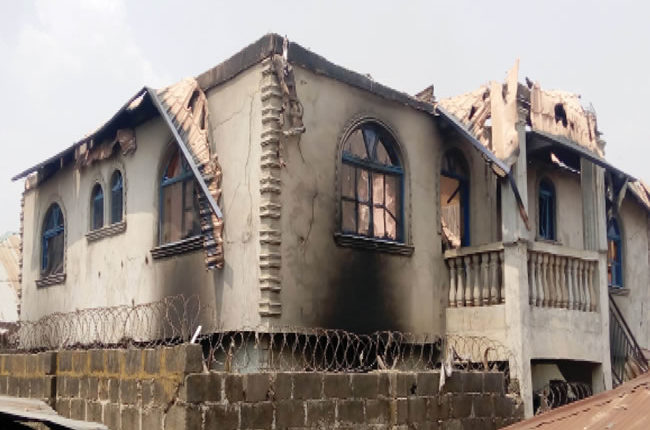 It’s been three days that a vicious fight broke out between the Hausa and Yoruba residents of Shasha community in Akinyele Local Government Area of Oyo State, but the indigenes of the area are yet to get over the shock and painful losses of their loved ones as well as properties and structures destroyed in the tribal clash.

When Sunday Tribune visited the town and market scenes on Saturday, there were indications that the ferocious feud is yet to subside despite heavy security presence spread across many checkpoints in different parts of the community.

Surprisingly, the presence of the security operatives didn’t frighten the Shasha residents as some of them were seen sitting in groups under different wooden shades with knives, cudgels, cutlasses, broken bottles and harmful steel objects; while the rest of them stood by the roadsides with harmful weapons. One word that resonated spiritedly on their lips was revenge. And the reasons were not far-fetched.

“Our houses, properties and structures which we toiled for years to build have all gone. Even my family house at Ajah quarters was razed down. The Hausas destroyed all our shops, kiosks, cars and over seven trucks in the market fire. They even burnt one popular pharmacy owned by Dr. Munirudeen, a popular medical doctor in our area. This was after they had smashed the windscreens of his Honda sport car and Hylanda Jeep on Friday. The man said he couldn’t pick a pen out of the pharmacy because its entire goods were burnt down. Is this fair?” One of the leaders of the angry Yoruba youths who identified himself as Tajudeen Alao, lamented to Sunday Tribune.

He said the entire uproar was triggered by altercations which ensued between one Hausa trader and a pregnant Yoruba woman who unfortunately couldn’t survive the blow meted out on her by the Northerner.

“The whole incidence started on Thursday when one Hausa trader conveying a basket of Tomatoes mistakenly splashed some water from the Tomatoes basket on a pregnant woman that was sitting along the road inside the Shasha market. Apparently displeased by the man’s action, the pregnant woman complained. But instead of begging the woman, the Hausa man slapped her. And a fight ensued. As they were fighting, the Hausa man pushed the pregnant woman and she fell on the ground looking unconscious. Immediately, she was rushed to the hospital. As people were trying to revive the woman where she fell, one shoemaker, Adeola Samsudeen, then engaged the Hausa man in a fight. But the Hausa trader hit him with a supposed spiritual ring and he fell down immediately. We then rushed him too to the nearby hospital. But he and the pregnant woman couldn’t survive it as they both gave up the ghost at the hospital on Friday morning,” Alao explained.

He said it was the deaths of the two people that triggered the spirit of vengeance in the Yorubas which forced them to engage the Hausas who already have started razing some of the shops at the market on that Friday.

“But not quite long on that Friday morning, the soldiers came and we begged them to stop the angry Hausas from razing more of our properties, but the soldiers said the order they got from the Seriki was to come and maintain order and not hold the Hausas even when our properties were being burnt as at the time they arrived. We even attempted to face the Hausas and stop them from wrecking more damages, but the soldiers prevented us. Many of our people lost their lives. Even two persons were macheted to death. We saw their corpses this morning when we were combing the area for the Hausas in retaliation,” he added.

“Meanwhile, after the fight had subsided a bit on Friday, one of the Shasha market leaders, Ismaila Mekudi popularly known as Baba Fatimo, led the Hausa fighters to the Shasha garage to start razing the shops. But by the time, we came back to the Shasha neighbourhood this (Saturday) morning; we saw that they had burnt more structures, most of which are residential buildings. Is this fair? In fact, some of the Yoruba police officers were angry, but the soldiers insisted that none of them and us must go to where the Hausas camped.

“Now, as we speak, the soldiers are using trucks to rescue the Hausas out of their camp in a bid to prevent us from taking revenge. We heard reports that we fought the Hausas and killed some of them. But this isn’t true because the soldiers did not even allow us to touch the Hausas, let alone destroy their properties. But they have razed down our houses and displaced many of our residents. And no one is saying anything on it.

Another resident in the area who spoke on the condition of anonymity said: “The number of houses destroyed is countless. Though the police and Amotekun officers were on ground, they couldn’t fight on our behalf due to the presence of the soldiers that had come and surrounded the Hausas residences. Some of the Shasha market women are yet to get over the shock of the incident because many of them lost their money, goods worth millions in the incidence.

“They couldn’t even pick up a dim out of the shops before they were all flamed up. The soldiers surrounded Hausa’s Seriki’s house and left our own Baale’s residence. As we speak now, his former house has been burnt. Yet, the soldiers kept preventing us from defending our land. We even heard that the fight has subsided. But that is not true because we won’t rest until we take revenge. Even this (Saturday) morning, the Hausas invited their brothers from Mokola and Akinyele and they jointly faced us. But what pained us, the Yoruba youths, mostly was that the soldiers, instead of suing for peace and restoring order, just rescued and whisked away the Hausa residents after the Northerners had burnt most of our properties,” he added.

One of the traders whose goods were burnt at the Shasha market, Seun Joseph said: “Gold, clothes, money, foodstuffs worth over ten million naira are what I lost to the Shasha market incident. I also sell beers, drinks, wines and I have three fridges. But they are all gone now as my shop was burnt down. I lost everything and couldn’t even pick a pin out of the shop. The cloth you are seeing on me right now was what I wore to the market yesterday. Since I fled the scene yesterday in the heat of the skirmishes, I am yet to return there. I learnt that the Hausas even attacked people in their homes, especially the old women who couldn’t walk and run like we, the young adults.

“As we speak now, most of my fellow market women have deserted the area and fled. As you can see too, my friend and I are on the verge of leaving this premise because the turbulence is gaining strength by the day. Many people packed out of their homes yesterday and ran away. Even as we speak, some are still packing out while some houses are still on fire.  I would have given you the number of one of our Yoruba leaders in the market, but he had lost his phone in the fight. As you can see, everywhere is deserted. We heard that it was only two people that died in the fight. But that is not true because we can’t even count the number of dead bodies we saw at the market yesterday.”

St Valentine’s Day: Love in a season of COVID-19