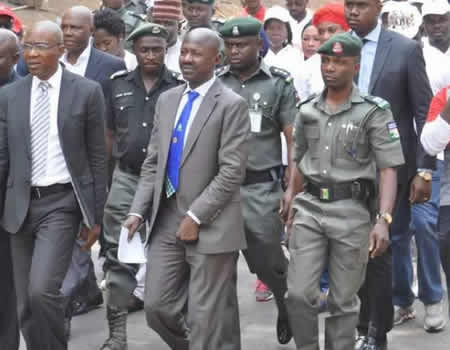 President Muhammadu Buhari has received the report of the judicial commission of inquiry on the investigation of Ibrahim Magu, the suspended acting chairman of the Economic and Financial Crimes Commission (EFCC), headed by Justice Ayo Salami (retd).

The report recommended that future heads of the agency should not be from the police. Salami also wants the president to consider disengaging, within the next two years, the 970 policemen on secondment to the EFCC which include Magu.

While presenting the report to the president at the presidential villa, Abuja on Friday, Justice Salami had observed that the four chairmen of EFCC since inception were from the police, recommending that in appointing a new chairman consideration should be given to candidates from other law enforcement or security agencies and a core staff of the EFCC as provided in the EFCC establishment Act of 2004.

He stated: “Your Excellency, permit me to say that four successive chairmen of the EFCC from inception, have been drawn from the police, therefore, in appointing a new chairman of EFCC, consideration should be given to candidates from other law enforcement or security agencies and a qualified core staff of EFCC as provided in the Economic and Financial Crimes Commission (Establishment Act 2004).

“It is also important to point out that at the moment, 970 policemen (114 drivers, 641 mobile policemen and 215 operations), are on secondment in the EFCC, therefore an exit plan for the disengagement of the police and other personnel within two years from now should be considered. This will address the issue of no promotion of core staff for over nine years.

“Your Excellency, our thinking here is that whoever you are appointing other than a core EFCC staff, should be in the transitional capacity of two years during which period, the arrangement would be made for the appointment of any of the core staff who has been commended by National Crime Agency, UK and other international law enforcement for their professionalism.”

He commended the President for the initiative to dispose of all forfeited assets “because of the poor condition of the assets we saw during our physical verification nationwide.”

He expressed profound gratitude to the President for giving the Commission members a wonderful opportunity to serve the nation.

Obaseki who joined the Peoples Democratic Party (PDP) in June after he was disqualified by the APC, defeated Pastor Osagie Ize-Iyamu of the APC in the election results announced by the Independent National Electoral Commission (INEC) on Sunday.

A Kano based industrialist, Chief Kalu Ogbonnaya, has advised the Federal Government to take necessary steps to stimulate the nation’s economy to prevent a recession post COVID-19.Salami committee wants policemen

Ogbonnaya who spoke in an interview with the News Agency of Nigeria (NAN) on Thursday in Kano, said as a result of the coronavirus raving the world, no business has been moving.Salami committee wants policemen

How we carried out the 1993 Nigerian Airways hijack —Ogunderu

Reps probe award of N18.9bn contracts for bush clearing, others during COVID-19…

IBB @ 81: Nigerians should be patient, pray to overcome current challenges