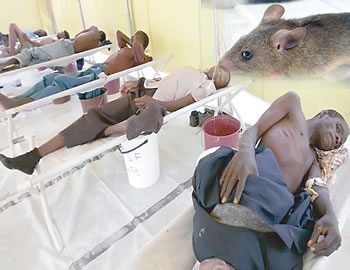 A total of 396 people have been placed on surveillance as a result of the death of an Assistant Chief Nursing Officer, Mrs. Abolanle Adewuyi,  of the Federal Medical Centre, Abeokuta, who reportedly died of Lassa fever.

This was disclosed by the State Commissioner for Health, Dr. Babatunde Ipaye, on Friday, during the commissioning of a private hospital, in Ifo,  that the people under surveillance had primary and secondary contacts with the late nursing officer, in case they develop symptoms of the disease.

He explained that the primary contacts are majorly members of the victim’s family, while the secondary contacts are the co-workers in the hospital, especially those in the same unit with the deceased nurse.

Ipaye explained that none of the contacts have shown abnormal temperature since they have been on monitoring, and that the medical officers attached to each of the contacts would continue to monitor until the specified period in line with the World Health Organisation (WHO) standard was exceeded before they could be medically adjudged to be free of the disease.

“All the 396 contacts have not shown any abnormal symptoms or signs of Lassa fever, their temperature is under control and we  have stationed our monitoring officer with each of the contacts to continue monitoring throughout a specific period in line with the World Health Organisation standard,” he said.

While urging members of the public not to panic, the commissioner assured that government was on top of the situation.

He, however, advised the people to cultivate high level of hygiene and keep their food away from rats.

Dr. Ipaye also advised members of the public to report any case of malaria symptoms that may have exceeded three days to the nearest General Hospital, the Ministry of Health, Oke-Mosan, Abeokuta or call the following dedicated lines; 09099140121 and 09099140122.