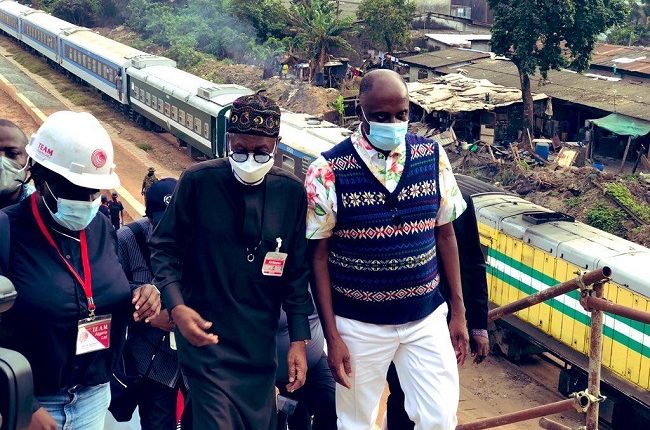 The Federal Government has revealed that the ongoing construction of the $1.6bn Lagos-Ibadan rail project is the best answer to enquiries over foreign loans borrowed by Nigeria.

This is even as the government said that by mid of September 2020, skeletal service’s will commence on the Lagos-Ibadan rail line.

Speaking on Saturday after a question and answer session after the rail inspection, the Honourable Minister of information, Lai Mohammed explained that there is no better way to answer questions on the monies borrowed than the standard gauge rail project.

He said: “We have been on inspection of the standard gauge rail since morning from Lagos to Abeokuta. From Apapa to Ebute-Metta, down to papalanto, and Abeokuta, we have seen what is being done. To me, there is no better way to answer Nigerians as to what we have done the monies that we have borrowed all over the world.

“From what we have seen today, the rolling stocks, the stations and others, it is obvious that this is a project that will outlive all of us here.

“We didn’t borrow money for overhead expenditures nor for some unnecessary services, we borrowed money for capital projects like rails, roads, bridges, power and general infrastructure.

“You can see the passion in the Hon. Minister of Transportation while we were inspecting the project. He was telling the contractors that he cannot wait till October, that he will be coming in four weeks time.

“I hope that at the end of the project, we will all come back here for the commissioning of the Lagos-Ibadan standard gauge rail project.”

In his presentation, the Honourable Minister of Transportation, Rotimi Amaechi said that there is no funding problem with the Lagos-Ibadan rail project.

“For this project, we don’t have any funding issue. There is enough money to complete the Lagos-Ibadan rail project.

“For the Lagos-Ibadan rail, we have a loan of $1.6bn which we are contributing about $200m and $300m Dollars. If your lender knows that your people are complaining that they don’t like the way he borrowed you loans, he won’t borrow you any new loan. Don’t forget, the Chinese have not finished paying the loans, they could stop at any time,” the Honourable Minister of Transportation explained.

On operation, the Managing Director of the Nigerian Railway Corporation (NRC), Engineer Fidet Okhiria stated that in line with the directive of the Minister of Transportation, skeletal services should start on the standard gauge rail line by mid of September 2020.

In the words of the NRC MD, “skeletal operation will start by mid-September from Yaba to Ibadan, while the construction work continues. We already have 24 coaches and a set of DMU engines. We hope to commence with 16 trips a day.”