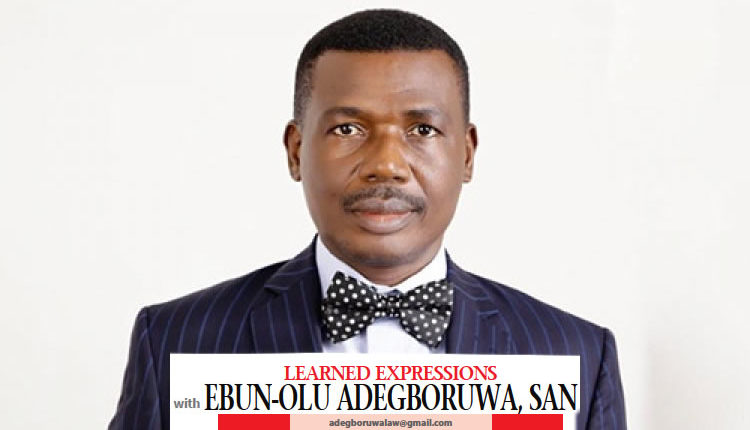 No project or infrastructure should be pursued by any government if it will lead to the death and frustration of its people. Apart from the fact that the law places a sacred burden upon the government to guarantee the safety of lives and property, the Constitution is very clear on the value placed upon human life and existence. This is why it is stated expressly in section 33 (1) of the Constitution that “every person has a right to life, and no one shall be deprived intentionally of his life, save in execution of the sentence of a court in respect of a criminal offence of which he has been found guilty in Nigeria.” Thus, where the government embarks upon a project the execution of which leads to the death, incapacitation or disability of its own citizens, a breach of the Constitution has occurred. That is the present scenario of the Lagos-Ibadan expressway reconstruction or repairs, as the case may be. It is nothing but a death trap. A man had worked tirelessly all his life, spent all his valuable time pursuing the common good, integrity and a society established upon the rule of law. He looks forward to a peaceful and glorious retirement thereafter. Then one day, he had cause to travel out of Lagos. On his way back to Lagos he ran into traffic gridlock occasioned by road reconstruction. You really cannot predict where the gridlock starts from most times, as it could be from Ibafo, Magboro, Wawa or even Mowe, in extreme cases. The vehicles on the road were all stuck on the same spot, virtually, with old trailers and trucks discharging poisonous fumes that will damage even the best of lungs. The man was getting palpitations and other signs of distress, having stayed in the horrendous traffic for hours. When it was unbearable, he got down from his car, in order to move around but it was too late. He developed complications and one thing led to another and he eventually passed on to the great beyond. The government killed him, the contractor hired for the execution of the road project, snuffed life out of him, in circumstances that were clearly avoidable. They have also killed and they are still killing many other Nigerians who ply that road.

The real issue is why a project that is meant to alleviate the sufferings of the people has turned out to be a death trap. And you would have wondered why it is said that the government and the contractor are and have killed people through road reconstruction. The only circumstance recognized by the Constitution for lawful deprivation of the right to life is when it is done pursuant to the execution of the sentence of a court in respect of a criminal offence for which he has been found guilty in Nigeria. And even at that, the person to be killed lawfully must have committed the most heinous offence such as murder, armed robbery, kidnapping, treason, etc. He has to go through trial and be granted all his rights and privileges to exercise his right of appeal against his conviction up to the highest court of the land. If eventually he loses his appeal to the Supreme Court, he will not be bundled and taken to the gallows immediately. The governor of the State where the offence was committed and where he was convicted still has to sign the warrant of his execution, such that if the governor deems it fit, the convict can still be granted the prerogative of mercy to enjoy reduced sentence or even outright pardon. That is why Reverend King and many other convicts are still alive. The reason for this detailed procedure is because human law replicates the law of God in placing a high premium on human life. Since the law or the government did not create anyone, extra care is always taken before life is taken or deprived. The other instances in which life can be taken under section 33 (2) of the Constitution is if the deprivation is as a result of the use, to such extent and in such circumstances as are permitted by law, of such force as is reasonably necessary:

(b) in order to effect a lawful arrest or to prevent the escape of a person lawfully detained; or

(c) for the purpose of suppressing a riot, insurrection or mutiny.

As demonstrated above, it takes a lot to take human life, even in lawful circumstances. This is why the agony, carnage and frustration imposed upon the people by the government and the contractor through the Lagos-Ibadan expressway reconstruction are totally unacceptable, from whichever angle it is viewed. No project or infrastructure should be worth the life of any one. The Lagos-Ibadan expressway must by now be the longest road construction ever embarked upon by any government, spanning a period well over ten years of the combined administrations of Jonathan and Buhari, with no sign of completion in sight at all. There is no justification for what Nigerians currently go through on that road, no matter the good intention of the government. In the scheme of things, good planning requires that the government and the contractor should have developed plans to ameliorate the agony and frustrations associated with such project, such as alternative routes, effective and efficient traffic management and control, adequate security for motorists and other road users, health emergency services like mobile first aid, ambulance services, illumination of the road at night, information dissemination and enlightenment programmes on options available in order to avoid the gridlock, providing timely warnings, etc.

The other point is that of funding for the project. Government should have prioritized this particular project in order to accelerate its completion schedule, given that it is said to be the busiest expressway in Africa. At some point during this long reconstruction of the road, the contractors had cause to cry out for lack of funding, threatening to abandon the project. Most times when you go through the road, you cannot see any sign of effective and purposeful engagement by the contractor, leaving you to wonder what could be the rationale for closing some portions of the road or narrowing other portions when no construction is being executed real time. The sad impression that one gets when you eventually get to the points of traffic and see no evidence of actual construction going on is as if the government set out to punish the people. Otherwise, how on earth can anyone subject his fellow man to such a harrowing ordeal of what is going on at the Lagos end of the Lagos-Ibadan expressway?

I was myself on that road recently over the last weekend. I joined the standstill traffic around the Wawa/Punch area, sandwiched by trailers and trucks, mostly of very old origin, emitting dangerous fumes all over the air. This was around 2am in the early hours of the morning. When I checked with Google map, it indicated that I had about two hours to get to my destination. We started the trip, moving at the pace of about five hundred meters per one hour and at times on a standstill. At this time of the night, it would be very dangerous to get down to seek to ease oneself no matter how pressing the situation may be. So I began to consider the various scenarios. Supposed I got so pressed to discharge waste or urine, for how long would I hold myself and at what cost to my body parts, especially the sensitive organs? Suppose I was under some health challenges that would not permit the sit tight posture of remaining in the same position for hours? The whole place was so dark that even the owl would think twice to fly around the zone. And then comes the issue of hunger and thirst. I was on my own, without any aid or assistance in sight. There were itinerary truck pushers on the bridge and other nondescript fellows milling all around the bridge, which raised the issue of security. Suppose some criminals, terrorists, armed robbers or cultists should appear from nowhere in a situation where one has several valuables in the car, children or women in his company? You could not go back or move forward and there were no policemen or other security personnel around to come to the rescue of motorists and road users. No government should subject its citizens to this trauma.

We continued on the tortuous journey, moving at very slow speed. At one point I got palpitations and faster heartbeat, indicating that I was undergoing some serious stress. So I started praying against any sudden attack, even though Google maps indicated that I still had more than one hour to go and the minutes kept increasing as we drove along. After about three hours of moving slowly on the long bridge, we got to the point where the contractor narrowed down the bridge, initially to two vehicles and finally one, at a time. There was no indication of any construction work going on and nobody was on sight, either to control the traffic or even to guide motorists. I was already freezing in the car and also experiencing swollen legs but I had to remain in the car in that same manner until I arrived at my location. We eventually got to Lekki around 6am, tired and totally worn out. It took the grace of God for me to get to my destination alive and well but that would mean that I became totally incapacitated for the entire day as I could not sleep when I got home. I suffered serious trauma from my ordeal on the journey.

This is what many Nigerians go through on the Lagos-Ibadan expressway daily, especially those who live in the outskirts of Lagos in places like Ibafo, Mowe, Wawa and other places, who have to commute between their distant locations and Lagos. It is no doubt a failure of statutory responsibility for the government and the contractor to subject us to this agony in the name of road construction. There is no way this can ever be represented or justified under the guise of providing needed infrastructure because a facility that is supposed to be for the common good and usage should not be the cause of deprivation of the life of the user. It is not logical or legal, from whichever angle in which it is considered. The appeal is to the government to consider adequate funding for this project, take it as a priority national asset and engage the contractor to put in place safety measures that will promote the health and well being of motorists and other road users. We should not embark upon a road construction that sends people to their early graves.