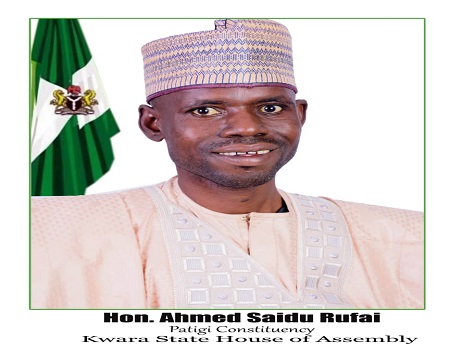 A member of the Kwara state House of Assembly, representing Patigi constituency, Hon. Ahmed Saidu Rufai has been reported dead.

In a statement made available to journalists by Special Assistant on Media to the Speaker of the House, Rt. Hon. Salihu Yakubu, the lawmaker in his late 30s, died at the University of Ilorin Teaching Hospital (UITH) in the early hour of Tuesday after a protracted illness.

It was also stated that burial of the late lawmaker in accordance with the Islamic injunction (Jannazah) would be done later on Tuesday, at his country home, Patigi.

Late Rufai, who died of an undisclosed ailment, had been in and out of the hospital for treatment even before the inauguration of the ninth Assembly in June.

It was also gathered that he left an aged father, wife and children.

The Media aide to the Speaker, Ibrahim Sheriff said, “He’s been sick for sometimes and has been going for medical checkups and treatment.
But was admitted last week because he still attended the last plenary.

“I don’t know the nature of his sickness actually, but he’s been strong even before their inauguration”.

The Speaker in the statement described the death of his colleague as a rude shock, saying, “it is with a heavy heart and total submission to the will of Almighty Allah that we announce the death of our colleague, Hon. Ahmed Saidu Rufai representing Patigi constituency.

“This is an unexpected situation that caught us in a rude shock, but unfortunately, the Almighty deprived us of the power to reverse such a sad occurrence.

“As we struggle to live with this tragic development and the vacuum that comes with it, we pray that Allah in His infinite mercy forgive his shortcomings and give his family, the 9th Assembly, Patigi Emirate, friends and associate and Kwara state at large, the fortitude to bear this great loss.”

Hon. Ahmed Saidu Rufai died at the University of Ilorin Teaching Hospital at the early hour of today and the Jannazah of the late legislator would be done later today, at his country home, Patigi.

Why I focused on provision of water for my people ― Tambuwal