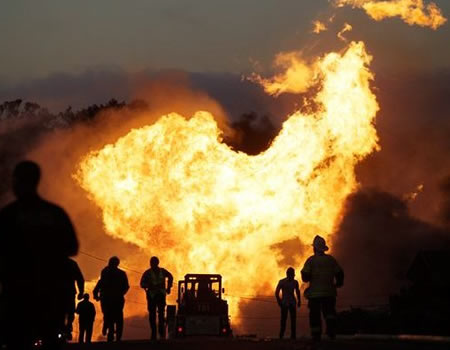 The Delta State Police Command has stated that the explosion that rocked Koko town, Warri North Local Government Area of Delta State, Tuesday evening, was caused by an air compressor.

Allaying fears generated by the explosion, Police Public Relations Officer (PPRO) of the command, Andrew Aniamaka, noted that it only impacted a mud house in the neighbourhood.

Aniamaka further explained that there was no need to whip emotion over the matter.

He noted that both the owner of the impacted property and the owners of the company had met and had agreed to sort out the situation without a third party.

“It was just making a mountain out of a molehill, that’ll be the way to describe it.

‘Yes, an air compressor was the cause of the explosion and affected a mud house, so to say.

The owner of the house and the manager of the company, Ebenco Global Link Nigeria Ltd, met and have agreed on their own terms to settle outside the police, ” the police spokesman disclosed.

It will be recalled that there was panic across Koko town on Tuesday, about 6:25p.m, when a loud explosion from the premises of Ebenco Global Link Ltd occurred, impacting adjoining houses.

Tribune Online had gathered that a container within the premises of the company suddenly exploded, sending the bits and pieces into the air and the surroundings.

No casualty was, however, recorded when the explosion occurred.