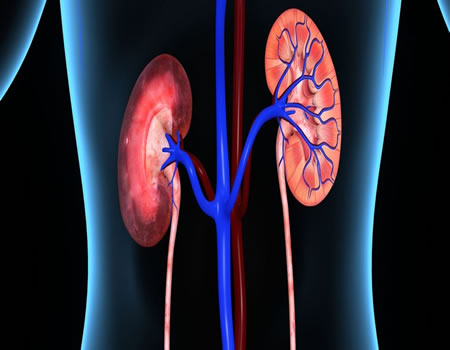 Diabetes is known to increase a person’s risk of kidney disease. Now, a new study from Washington University School of Medicine in St. Louis has suggested that the converse also is true: Kidney dysfunction increases the risk of diabetes.

Further, the researchers deduced that a likely culprit of the two-way relationship between kidney disease and diabetes is urea. The nitrogen-containing waste product in blood comes from the breakdown of protein in foods. Kidneys normally remove urea from the blood, but it can build up when kidney function slows down.

The findings are significant because urea levels can be lowered through medication, diet — for example, by eating less protein — and other means, thereby allowing for improved treatment and possible prevention of diabetes.

The epidemiological study, conducted in collaboration with the Veterans Affairs St.  Louis Health Care System, is published in the journal, Kidney International.

“We have known for a long time that diabetes is a major risk factor for kidney disease, but now we have a better understanding that kidney disease, through elevated levels of urea, also raises the risk of diabetes,” said the study’s senior author Ziyad Al-Aly, MD, an assistant professor of medicine at Washington University. “When urea builds up in the blood because of kidney dysfunction, increased insulin resistance and impaired insulin secretion often result.”

In collaboration with scientists at the St. Louis Veterans Affairs’ Clinical Epidemiology Center, Washington University researchers examined medical records in national VA databases to dissect the relationship between kidney disease and diabetes. They evaluated the records of 1.3 million adults without diabetes over a five-year period, beginning in 2003.

A common blood test that measures the amount of urea nitrogen found in the blood showed that 117,000 of those without diabetes — or 9 percent — had elevated urea levels, signalling poor kidney function.

“That figure — 9 percent of people with high urea levels — remained relatively constant over time,” Al-Aly said. “It is also reflective of the general population.”

Al-Aly said he was inspired to delve into the relationship between diabetes and kidney disease after reading a mouse study published in the August 2016 Journal of Clinical Investigation. As part of the study, researchers from the University of Montreal Hospital Research Centre in Canada induced kidney failure in mice. Subsequently, many of the animals experienced elevated urea levels, resulting in insulin resistance and impaired insulin secretion.

“I read the study with excitement and intrigue, and I thought, ‘We have to test this in humans,’ ” Al-Aly recalled. “Our results were almost an exact replica of the mouse study. The results showed a clear relationship between urea levels and risk of diabetes.”

Why Nigeria may miss out its family planning target