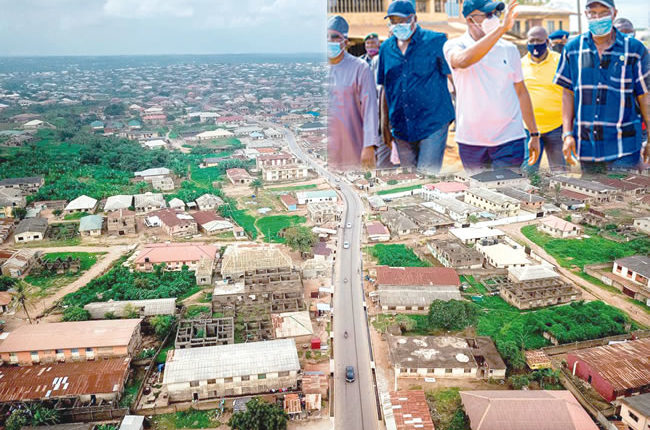 It was jubilation for residents of Fajol Junction-Ajegunle-Osara-Gbonangun Area in Abeokuta metropolis, when the Ogun State governor, Dapo Abiodun, visited the area to inspect a newly completed 7.1km intercommunity road.

The road, which crisscrossed communities in the Abeokuta South and Odeda local government areas, was among similar roads being constructed by the Abiodun-led administration across the three senatorial districts of Ogun.

Though all the roads under construction are key to the socio-economic development of the state, and thus, being applauded by the residents of the state, the completion of Fajol Junction-Ajegunle-Osara-Gbonangun road, which had begged for attention for almost three decades, drew huge applause from residents of the area.

Little wonder that residents in the communities where the road courses through, trooped out en-masse to express their gratitude to the governor, when he and his cabinet members, drove through the road, to ascertain the quality of work done by the contractor handling the project.

The governor, who had earlier embarked on similar inspection of Oba Erinwole Road in Sagamu and Kuto Flyover in Abeokuta, as well as the service lanes linking the flyover to the NNPC Flyover, was warmly received at the Fajol Junction.

Apart from leaders of the community development associations, youths and commercial motorcycle operators came out to give Abiodun a rousing welcome.

Addressing the gathering, Governor Abiodun said he was out with his cabinet members to drive on the 7.1km road, to ascertain at first hand, the quality of job done by the contractor.

He reiterated that his administration would continue to give priority attention to roads, hospitals and other projects abandoned by his predecessor, noting all the projects were funded with task payers’ money.

He further declared that no part of the state would be neglected in the distribution of infrastructure, adding he had decided to make the people the centre of his administration.

According to him, “I will not leave any project abandoned by the previous government. Those they funded or abandoned midway will be completed by us. When we were drawing up budget too, we asked for your inputs and these are the roads and projects you chose by yourselves.

“Infrastructure, especially road, will be given the right attention in order to open up the state for more economic development.”

He explained that the issue of good road network in the state could not be over-emphasised as roads open up the state to socioeconomic activities and promote the welfare of the residents.

Speaking further, Abiodun informed the gathering that the Oba Erinwole Road, which according to him is an important road that serves several industries and also links the Sagamu-Ore-Benin Expressway, was in a terrible state when he took over and had become a death trap for its users.

“Before I came here, I have gone to see the level of work done on this Oba Erinwole Road. This road is very important as it leads to many factories and industries. We awarded the contract for this road in March this year. If not for the pandemic, work would have gone further than this by now. When it is completed, it will alleviate the suffering of the people,” he stated.

On the Kuto Flyover and the service lanes in Abeokuta, the governor said that the project was awarded by the last administration, but it would be completed soon, adding he had extracted commitment from the contractor.

The governor noted that most of the road projects executed by his administration were prioritised by the residents themselves as they were allowed to do so while government was preparing the budget.

“For instance, it was part of our inclusiveness that made the people to choose the 7.1km Fajol-Osara-Gbonagun Road. This is an inter-local government road that would link Abeokuta South and Odeda local government areas, as well as act as a bypass to the Abeokuta-Ibadan Road”, he said.

While informing the people that roads were simultaneously being constructed across the state, Abiodun disclosed that similar projects were ongoing at Ipokia and Imeko local government areas.

He, however, used the event to disclose that construction work would soon commence on Gbenro-Isashi-Akute Road bordering Lagos.

He submitted that the desire of his administration was to ensure that the people are able to transverse the length and breadth of the state with ease, saying that “work so far done is a tip of the iceberg.”

In their respective remarks, the former Senator representing Ogun Central Senatorial District, Senator Gbenga Obadara and the Chairman of the All Progressives Congress (APC) in the state, Yemi Sanusi, appreciated the governor for keeping to his election promises, adding that the projects would go a long way in enabling the people achieve their aspirations.

On his own part, the leader of Fajol Community, Alhaji Kafidipe, said the Fajol-Osara-Gbonagun Road had been in a deplorable condition for more than 30 years, appreciating the governor for keeping to the promise he made during the election campaign.

For the 61 year old resident of Ajegunle Community, Olukemi Ogunyomade, the construction of the intercommunity road is a dream come true. The auto lubricants dealer, who disclosed that he moved to the area in 1989, said the road had been a nightmare to the residents of the area, particularly motorists.

He commended the governor for ending three decades of infrastructure neglect by the past governments in the state.

“I am highly elated that this road is finally done. I got here in 1989 when I completed my house. There was no road at all; it was one late lawyer, Akintola, popularly known as ‘Baba Seaman’ who opened up the road. But the road, which is a good bypass for people living in upper Obantoko area, Eleweran, Camp and even traveling to Ibadan, had been in bad shape, until the incumbent governor constructed it.

“With this road, people are now moving to develop their property here. Even, the value of landed property has more than doubled, thanks to Governor Abiodun,” he said.

Ogunyomade, however, appealed to the government to construct speed breakers on the new road.

On his part, a commercial motorcycle rider, Nurudeen Oke, saluted Abiodun for hearkening to the yearnings of the residents and constructed the road. He added that the road had been used as campaign and election gimmicks to deceive residents into voting for past governments in the state, but nothing was done.

Oke, who equally urged the government to put humps on the road to control speed limit, begged the governor to fix Apete-Bode Olude and Aregba-Car Wash roads.

For Mrs. Adeola Oduwole, a resident of Osara Community, the road has further opened up the area to economic and business boon, in the short time it was constructed. She wanted the state government to install street lights on the road, to add to its aesthetics at night.

A barber shop owner on Gbonangun road, Jimoh Muftau, recalled how vehicles used to get stuck on the road and the youths in the community made brisk business by helping stuck motorists. He, therefore, lauded the governor for making the construction of the road a priority.

For the duo of Mrs. Abosede Ogunbona and Alhaja Olawunmi Akintunde, the governor has removed “pains” of bad road by giving the communities a good road.

They, however, submitted that environmental sanitation officers should monitor the newly constructed 7.1km road, to ensure residents don’t dump refuse in the drainage to block the water flow.