I stand with Wike ― Ortom 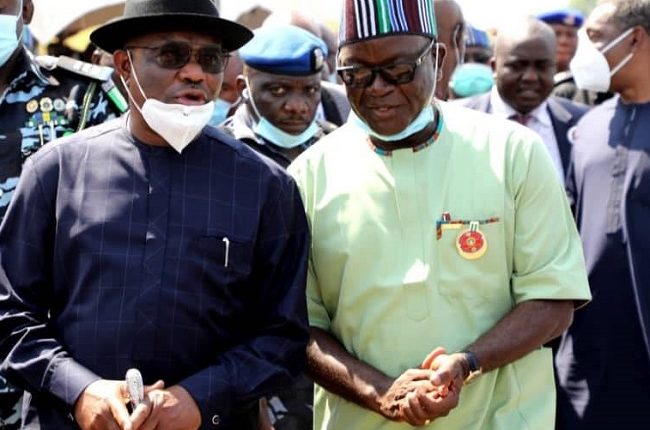 Governor Samuel Ortom of Benue State has said that he remains with his counterpart in Rivers State, Nyesom Wike.

Governor Ortom stated this on Tuesday while reacting to a report from a national daily, not Tribune Online.

Ortom who spoke on the issue after a meeting with the Peoples Democratic Party caucus from his senatorial district, known as Zone B reiterated his anger at what he described as injustice and meted out to Wike.

The governor and Senator Iyorchia Ayu are from the same senatorial district which comprises two axes; JEMGBA and MINDA. While the governor is from MINDA, Ayu is from JEMGBA.

Ayu’s kinsmen from Abuja had berated the governor for working for the downfall of their son which triggered the response from Ortom’s media aide, Nathaniel Ikyur to release a statement that his principal having facilitated the emergence of Ayu couldn’t have turned around to work against him.

Piqued by the report from a national daily, Ortom said that he remains with Wike who he described as his friend, adding that both of them just returned from London yesterday.

According to the governor, “And the headline from This day that I have split with Wike, I just came back from London with Wike this morning. We are friends and I still maintain my stand on what I said. I have not moved away from there, and I still sympathize with Wike on the injustice meted on him.

“Politics is about interest and where your interest is not protected, you have a right to protest and I think that is what is happening. The party leadership has not been fair to Governor Wike based on activities that took place during and after the convention. We have not been able to deploy adequately the internal conflict mechanism to resolve those issues and this is all I have been saying.

“I sympathize with him and still stand with him that let the leadership of the party at the national level do the same thing. In politics, nothing can be late, no matter how difficult it may seem if everybody brings down himself to the level of getting others who are aggrieved.

He further said, “And to say that some of us are happy with the injustice that has been meted out, it is not, we remain committed to PDP and I feel that the right thing should be done to put us together.”