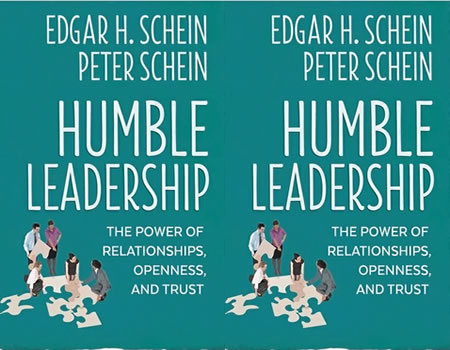 Have you given any thought as to why opinions are so polarized around President Trump’s style of leadership?  It is not about his tweeting, deceiving, and flip-flopping.  It is about his theory of leadership that hinges on his own (or your own) intuition, motives, and needs as the basis for decisions on what to do.  It is an individualistic “I alone” hero theory that assumes that whatever the leader says must be true, at least in the moment, just because the leader has said it.

This personal style reveals a problem with the leadership of a great many of our organizations and institutions. Leaders trust only their own selves instead of recognizing that, in a complex world, they must also trust many others to provide help so that decisions can be made collaboratively, not unilaterally.

One approach to addressing this endemic problem is to reduce the psychological distance between you the leader, your immediate reports, your colleagues and advisers. Get to know each other personally and build groups that can process complex information collectively and comprehensively in order to make better adaptive moves.

If you have closer relationships with the people whom you want to follow you, get to know them better so that they are more open with you and trusting in your mutual respect. Only then will you have a chance to make the decisions that can actually be implemented by a much broader set of stakeholders who will observe and reinforce the trust relationships that yield better collective decisions.

That is the message of “Humble Leadership”: get to know your people, acknowledge your dependence on them and build an effective group with them, and better decisions will follow.

When you have interdepartmental or intergroup conflicts between groups, bring them into the room together and before trying to find compromises, invite them to tell each other their full stories, quiz them to bring out their personal reasons for their position, help them to understand each other at a more personal level before either getting into a debate, seeking victory in a zero-sum game (also a myth) or seeking a lowest-common-denominator, unsatisfactory compromise.

Instead of worrying about your own accountability, help your direct reports and peers — upon whom you are dependent — to think of themselves as a project group that is accountable as a group. The more you get to know each other, the more likely it will be that people will be more open both in producing new ideas and in challenging group think.

Simple truth: It is hard to lie or withhold information from someone you have gotten to know well. We want to introduce the word “personise” to convey this activity of reducing psychological distance and increasing psychological safety by consciously getting to know each other — not as role occupants who transact with each other, but also as teammates trying to help each other get the job done better.

Challenge the assumption that “professional distance” is a good thing. We know how to manage closeness and space with our friends and relatives. Bring this knowledge, this skill, that we develop starting early in our childhood with you to work every day. Humble leadership means that you consciously bring “personisation” into the workplace.  Try it, and see how the others around you respond.

Covid-19: The unravelling of the Nigerian elite