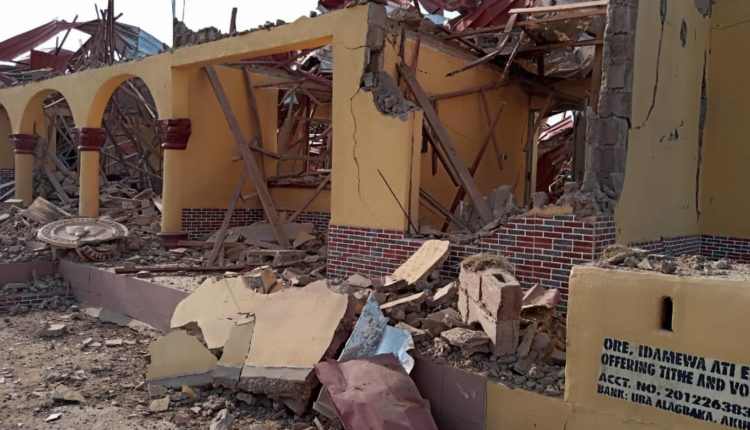 No fewer than 70 houses were on Saturday destroyed in Eleyowo/Iluabo communities on the Akure–Owo Expressway in Akure North Local Government Area of Ondo State when objects suspected to be explosives exploded in the area.

The blast, which occurred around 12:57a.m., left about 13 people injured, while it cut off the ever-busy Akure – Owo road, leaving many travellers stranded on the road.

The incident, which happened less than a kilometre to the Akure airport, affected many residents of Eleyowo and Iluabo communities, completely destroying a church named Possibility Prayer Ground for All Nation Church and a school in the area, Aina Awaw International College.

According to a resident, who explained that the loud sound from the explosion woke many of the residents, many structures in the area were affected by the explosion.

The impact of the explosion was heard about 10 kilometres from the scene and it affected some other buildings within the Akure metropolis. 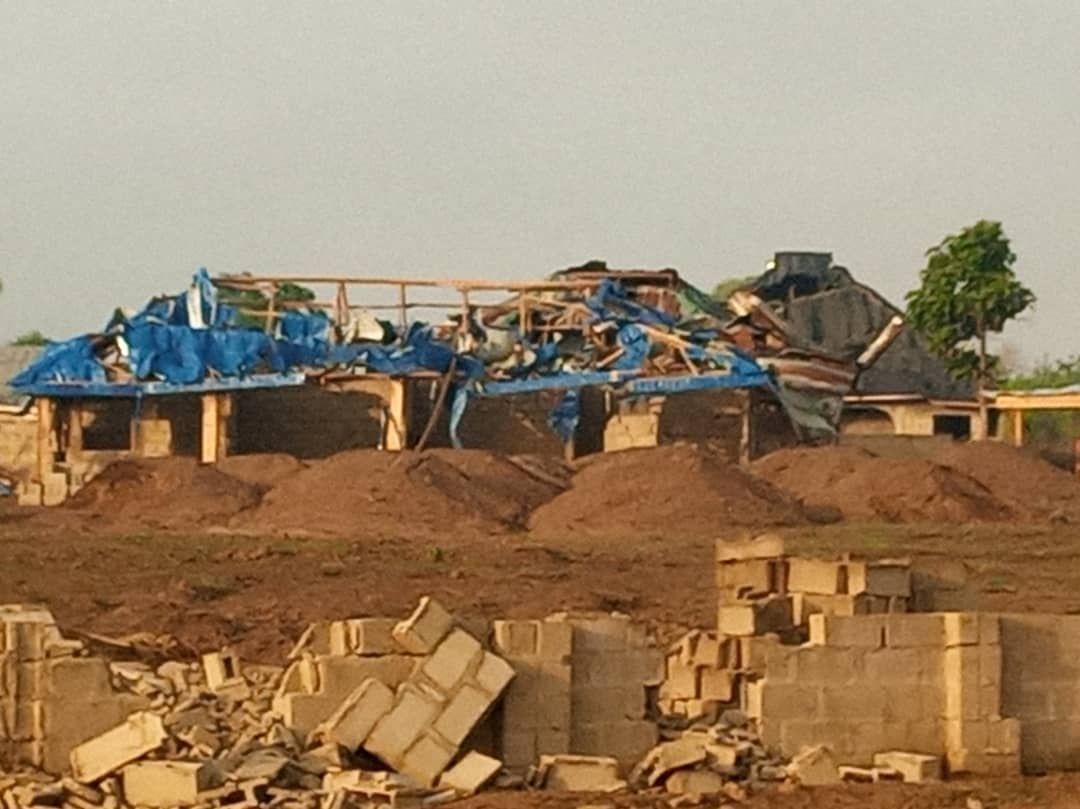 Meanwhile, the state Commissioner of Police, Undie Adie, who visited the scene of the incident explained that the explosion was caused by a truck conveying dynamites meant for a quarry in Auchi, Edo State.

The dynamites were said to have been bought in Ibadan, the Oyo State capital and was being taken through Ondo State enroute to Auchi when the vehicle conveying the materials developed a mechanical fault.

He said the driver and those in the vehicle tried to fix the vehicle and moved it away from residential area to avoid multiple casualties, but the vehicle finally exploded opposite the church and school buildings.

“The security operatives who were escorting the vehicle gave the red alert which made the truck driver and another person to jump out of the truck before it finally exploded,” he said.

He appealed to residents of the community to stay away from the scene and allow security agents to carry out their investigation. 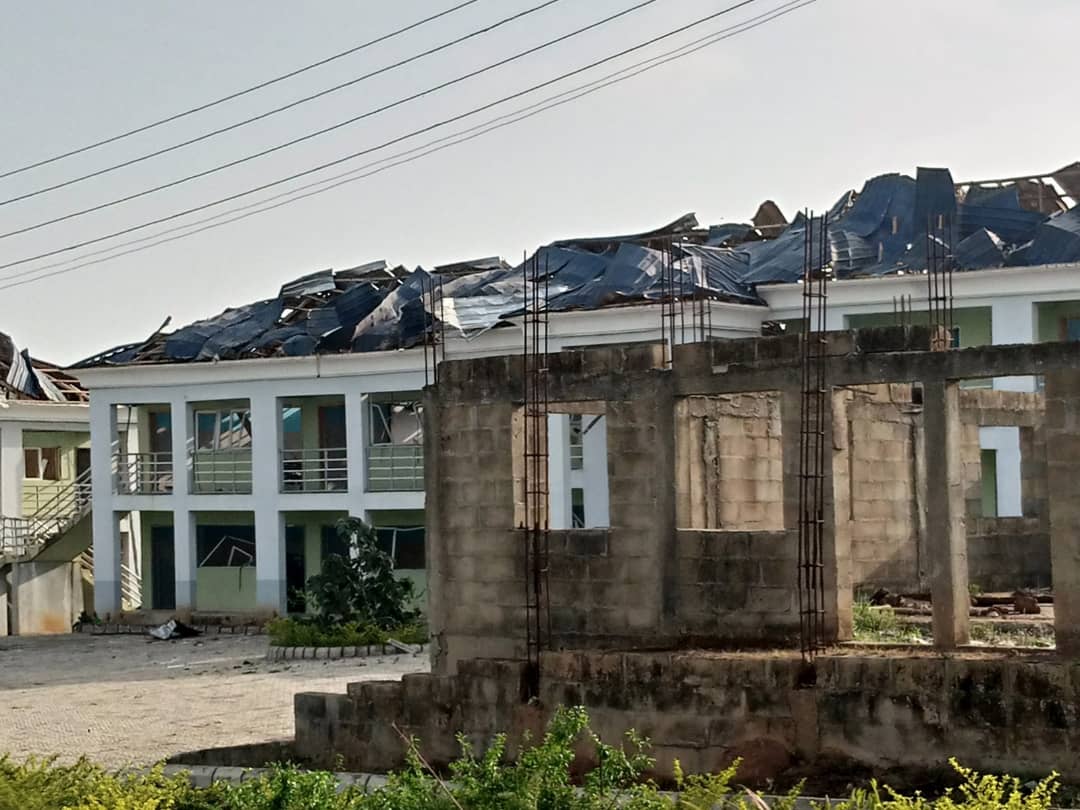 Stay away from the scene, it’s still dangerous –Akeredolu

The state governor, Mr. Rotimi Akeredolu, also visited the scene of the incident and sympathised with the victims. He described the explosion as an accidental discharge.

Akeredolu said; “I have been briefed by the security chiefs that in the early hours of Saturday, March 28, a vehicle in a convoy transporting explosives to a storage facility in a neighbouring state developed a fault while in transit along the Akure – Owo road about two kilometres from the Akure airport.

“Security personnel and other individuals transporting the ordinances noticed smoke from the vehicle. After several attempts to extinguish the resulting fire failed, the vehicle and its consignment ignited and caused the massive explosion that was felt in Akure and its environs.

“At present, efforts are being made to ascertain if there are casualties. Following my visit to the scene, I have directed that the area be cordoned off to allow the explosive ordinance department and bomb squad to extricate the vehicle buried underground, because it is unclear if there are still explosives that are yet to be detonated.”

The governor added that owing to the crater caused by the explosion on the road, the state government had provided an alternative route for commuters plying the stretch.

“For now, no report of casualties has been recorded, but the explosion has had a devastating effect on many buildings, including schools and a church.

“The government of Ondo State wishes to appeal to all to be calm and refrain from flaunting theories that are capable of distracting the security agencies in their investigations,” he said.

Akeredolu advised the people to be careful and take precautions not to rush to the scene. This, according to him, was pertinent, because the blast, the scene and its immediate effects were already security concerns. 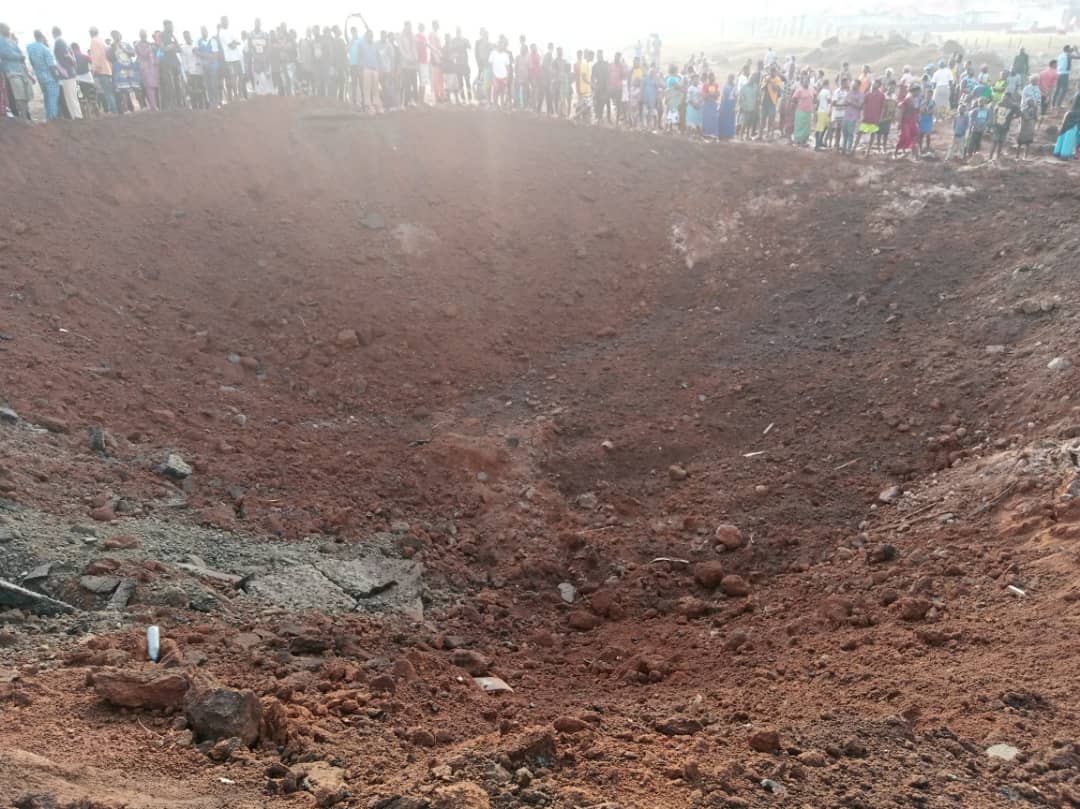 We thank God school was closed by government earlier –Principal

Speaking on the destruction of the school, the principal of Aina Awaw International College, Mr. Roland Kayode Jayeola, said he was notified of the development by the school’s security guard, expressing his delight at the closure of the school due to the state government’s directive to avoid spread of coronavirus.

He said the three security guards of the schools were injured in the incident and had been rushed to a hospital and were responding to treatment.

While quantifying the damage done to the school to be in hundreds of millions of naira, he appealed to the state and federal governments to come to the aid of the school.

I crawled out of debris of our collapsed church building –Founder

Also, the founder of Possibility Prayer Ground for All Nations, Prophetess Olayemi Adesida, who was in the church auditorium when the incident occurred, said the building collapsed on her and that she struggled through the debris to safety.

She said 10 members of the church were injured as a result of the blast, but added that they were currently recuperating at the hospital.

“I was in the church around midnight when suddenly I heard a loud sound and before I knew what was happening, the whole church collapsed on me.

“I started praying, calling for help from the Holy Spirit to save me and others in the church. I was praying against the death of any of the church member under the rubble and the good Lord saved us all,” she said.

Speaking on the conditions of the victims, Adesida said “they are all alive. Though they are still in the hospital; they are not in critical condition.”

…Our thoughts, prayers with victims –APC

The All Progressives Congress (APC) National Working Committee (NWC) has sympathised with victims of Saturday’s explosion in Iluabo, on the Akure–Owo road, Ondo State.

A statement signed by APC spokesman, Lanre Isa-Onilu, said the damage done to buildings were enormous.

It dismissed speculation of the motive behind the incident as it noted that the state governor, Rotimi Akeredolu, and certain security chiefs had been adequately briefed.

The party expressed confidence that the state government would put in place rehabilitation measures to cater for people displaced and affected by the explosion.

“Following Saturday’s early morning explosion which occurred in Iluabo, along the Akure–Owo expressway, the APC sympathises with victims of the explosion and the government of Ondo State.

“Going by the images of the buildings and other properties destroyed as a result of the explosion, it is clear that the blast was a powerful one. However, we must desist from unnecessary and unfounded conspiracies surrounding the unfortunate explosion.

“The Ondo State governor, Rotimi Akeredolu, SAN, has promptly visited the scene to assess the extent of damage and he has been briefed by the security chiefs who reported that the accidental explosion occurred in a vehicle transporting explosives to a storage facility in a neighbouring state.

“While relevant authorities ascertain if there are casualties, we urge calm and assure all residents that the authorities are attending to the situation; the place has been cordoned off and a bomb squad deployed to the area. There is no cause for alarm.

“In the meantime, we are confident that the state government will put in place rehabilitation measures to cater for people displaced and affected by the explosion. Our thoughts and prayers are with the victims,” the party said.

ELECTION MILITARISATION: When the US gave its verdict on 2019 elections