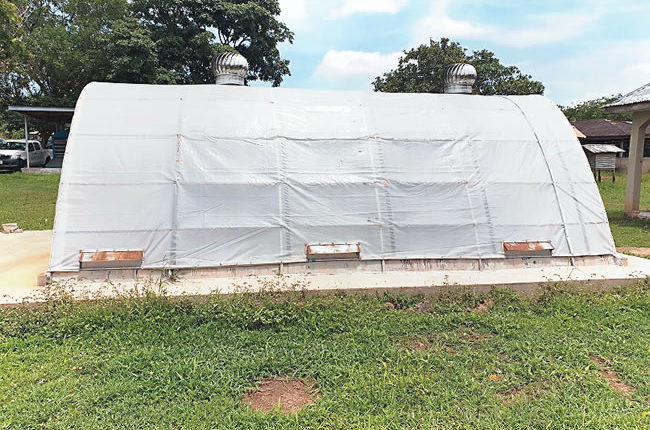 IF you visit many offices across Nigeria at lunch time during the months of May, June, July and August, chances are high that you will find a good number of workers munching away at “mouth organs”. Yes, it is the period of the year when corn is in season and one of the most popular delicacies at this time is the combination of roasted corn, popularly code-named as “mouth organ” and the African pear. Coconut is an occasional close substitute for pear and this writer has it on good authority that many people find the coconut and “mouth-organ” combination, just as delicious too.

Unfortunately, outside of those months when both corn and pear are in season, this delicious combination is unavailable. Interestingly, during those harvest months, enough corn and pear to sustain the country for a substantial period, if not for the entire year, may have been harvested. But with inadequate knowledge of the existence of modern and cost-effective storage and preservation methods, tonnes of maize and pear end up wasted every year. Upon harvesting, pear in particular, has a very short window within which it must be consumed before it goes bad.

The same applies to practically every other agricultural commodity in Nigeria. In the countryside at harvest periods, you will practically find a surplus of agricultural commodities, but often, in the absence of proper storage, a huge proportion of these harvests eventually goes to waste. These perennial losses pose a huge threat to the economic wellbeing of farmers, majority of whom operate at the small scale or subsistence level. It also has a negative overall implication on our ability as a country, to feed ourselves and export surplus to other countries for our economic benefit.

The challenge which poor storage poses to food security in Nigeria will worsen in the post-COVID era, if it is not systematically tackled and in good time, too.

It is, therefore, imperative that beyond improving the volumes of our agricultural output, we look critically at how to empower farmers across the country to better manage their harvests. This will translate to immense economic value not only for the farmers themselves whose livelihoods will be enhanced, but also for the country as a whole, as more food will become more widely available and for extended periods, for consumption and export.

Incidentally, several research organizations and universities as well, have over the years, ardently sought solutions to this problem, with a handful of innovations to show for their efforts. Many of the solutions are particularly unique because being home-grown, they reflect the realities of our local environment. Not only are they relatively cheap and far more efficient than many traditional methods, as they are also often technically uncomplicated, farmers can adopt them readily.

In the area of fish farming for instance, there is an innovation known as the “iced-fish box” with which harvested fish may be stored and kept fresh for a few days for instance, while being transported to the market. The ice-fish box is also very useful in the hospitality industry, especially for hotels and restaurants, which need to keep harvested fish fresh ahead of further processing. So it’s a very useful means of keeping fish fresh and natural ahead of further handling even while such fish may be in transit. In addition, specialized smoking kilns have been developed to replace the labour-intensive, yet inefficient and unhealthy traditional fish-smoking methods. Output from these kilns is good enough for export and is several multiples of what is ordinarily obtainable by traditional fish-smoking methods. Nigerian researchers have also produced composite packaging material that can be used for packaging such smoked fish or even smoked meat as the case may be, preserving the end-product and boosting its commercial appeal.

Whether it is beans, corn or rice that become discoloured, mouldy, smelly or infested with weevils, grains pose problems of storage for farmers, often leading to considerable financial losses. In the past, grains exported from Nigeria have also faced rejection because of the unacceptable levels of chemical residues (often from pesticides) they contain.

Local researchers have been active in the area of grain preservation, churning out a handful of innovative solutions over the years. For instance, there are solar dryers that have been developed for different agricultural commodities. Given the abundance of sunshine in our country and the simplicity of construction of these dryers, they are relatively affordable by the average farmer. Farmers are also able to replicate the construction of these solar dryers using a huge proportion of locally-available raw materials. Essentially, these solar dryers work to enhance the efficiency of drying of agricultural produce, saving time and availing farmers of more convenience too. They do this by concentrating the rays of the sun on a particular surface, enhancing drying efficiency over the traditional method of spreading grains, plantain and cassava peelings among others, indiscriminately under the sun.

Specially constructed steel drums which when properly shut become airtight (hermetic) and with which farmers can store grains over several months, have also been developed by local researchers. Because these drums are airtight, insects, fungi and other germs are unable to survive in them, and damage to stored grains is avoided.  There are specialized storage silos as well, which can help store and preserve grains over many months. There is in fact, a particular twin silo which can jointly accommodate up to 100 tonnes of grains at a time. Grains are preserved so well by the silos that after more than three years of storage, they are still able to germinate.

Local researchers have also developed bio-pesticides as an alternative to chemical pesticides. Commonly available chemical pesticides though effective against pests are often harmful to man and the environment. Bio-pesticides, on the other hand, are much safer and constitute no environmental hazard. One such pesticide, (NSPRI DUST) an innovation by the Nigerian Stored Products Research Institute, was made from diatomaceous earth, a particular kind of rock which occurs naturally in parts of Nigeria. Bio-pesticides will help to make Nigerian grains potentially more acceptable in the export market.

For fruits and vegetables, local researchers have over the years, come up with a number of different solutions, as well. There is the “Fruit and Vegetable Shed” for instance, which is constructed with simple and locally available raw materials, and which helps farmers to store and preserve fruits and vegetables, in so doing, extending their shelf lives and enabling farmers derive more value from their harvests. There is the fruit dryer, which by drying certain fruits helps to preserve them.

When water evaporates from a surface, it produces a cooling effect, similar for instance to what happens when sweat evaporates from our skins. The cooling effect which water produces when it evaporates is known as “evaporative cooling”. Local scientists have been working over several years to deploy this principle of evaporative cooling to the preservation of fruits and vegetables. Incidentally the principle of evaporative cooling is not new and has been practiced by Nigerians in traditional settings for many decades, as a method of preserving fruits and vegetables. The intervention by local researchers is now targeted at enhancing the efficiency and scale of these traditional methods in such a manner that farmers are able to preserve larger volumes of agricultural produce over longer periods. Results garnered so far are very impressive and in the not-too-distant future, more innovations are likely to emanate from this area.

The emphasis on the innovative use of evaporative cooling recognizes that more sophisticated approaches such as refrigeration which is commonly used in developed countries to preserve fruits and vegetables, are hardly feasible in our environment. This is not only because of high upfront costs but also the unreliability and sometimes sheer unavailability of power, particularly in rural areas where the majority of farmers operate. Evaporate cooling systems, on the other hand will be locally made with freely available raw materials, uncomplicated and easy to operate.

There is no doubt that widespread adoption of these technologies by farmers across the country will help to considerably stem the tide of post-harvest losses in Nigeria. This will translate to considerable savings for millions of farmers and in addition provide a robust window of opportunity for exports of additional Nigerian products. For the average consumer in Nigeria, it will very likely lead to better food availability which will in turn result to a drop in cost of food.

There is therefore, an imperative for farmers to adopt these new technologies that are being churned out by our research institutes regularly.

Getting the agricultural value chain to increasingly adopt these innovations will entail patient and systematic engagement.

The financial sector also needs to be strategically engaged. Banks and financial institutions can potentially enhance the widespread adoption of these technologies by helping farmers to finance the acquisition, either through farmers’ cooperatives and associations or directly with individual farmers themselves.

It is critical too, that the innovations remain affordable to the average farmer. Researchers must not rest on their oars. They must continue to examine and enhance the effectiveness and efficiency of the different agricultural innovations. Researchers must continue to seek to deploy new cost-effective approaches towards solving these age-old problems.

As a vital link between different publics, the media needs to be carried along more intricately too, by Nigeria’s agricultural science industry. The media needs to better understand and appreciate the challenges with which the agricultural sector is confronted as well as promote the innovative solutions that continue to be churned out regularly, in order to help enhance adoption of these solutions by the agriculture value chain.

Research institutes and Faculties of Agriculture in our various universities, being hotbeds of innovation, must increasingly, work more collaboratively in order to jointly share and popularize innovations that are emanating therefrom.

Agricultural chambers of commerce are a potential source of popularising these innovations especially among policy makers and influencers and should also be engaged.

Today’s smartphone comes with immense computing power and lots of possibilities including the ability to keep large communities of farmers abreast of new innovations and developments in a simple manner and in a language they understand. Smartphone penetration is growing very fast in Nigeria. Though exact data with which to quantify its adoption and spread especially among rural farmers, is not readily available, we can logically project, based on current trends, that smartphone penetration will continue to deepen in the coming years, with smartphones getting into the hands of many more farmers.

By providing a quick and easy access to the Internet, smartphones portend a highly effective medium with which to reach millions of farmers and other members of the agriculture value chain. It’s also a veritable means with which to reach influencers and opinion leaders who can help to further enhance awareness of these local agricultural innovations and gradually spread this awareness to the wider population. Ultimately, smartphones have enormous potential to take information and education to millions of people and in doing so, motivate them to adopt these value-laden innovations.