High blood pressure can cause miscarriage! 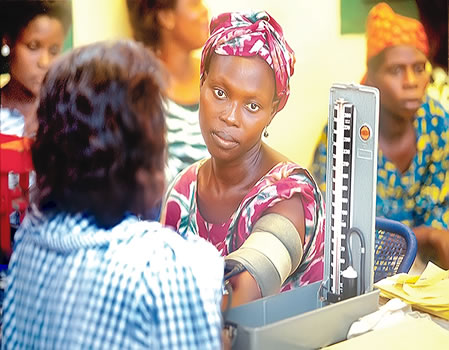 Losing an unborn child can be an incredibly traumatic experience for couples. But experts in this article by SADE OGUNTOLA say that attaining a healthy blood pressure before conception could not only have benefits later in life, but also reduce the chances for pregnancy loss.

OFTEN times, the question on the lips of many women after an incidence of miscarriage is what could have been responsible for it. Sometimes, they question stress. Some women talk about having sex while others mention spiritual attacks and lifting heavy things.

Certainly, the opinion of experts on what causes miscarriage is totally different from all of these. But one reason that experts have raised that many women may start to think about is their blood pressure level before pregnancy.

Well, experts in a new study said that having a high blood pressure before becoming pregnant raises a woman’s risk of a miscarriage by nearly 20 per cent.

In a new study, researchers observed that even when their blood pressure was in a healthy range before pregnancy, each 10 mmHg (millimetres of mercury) increase in systolic blood pressure was associated with an eight per cent higher risk of miscarriage

Also, the study observed that those with diastolic blood-pressure readings above the healthy score of 80mmHg are more likely to lose their pregnancies.

This risk rises up to 18 per cent for every 10mmHg blood pressure increase even when women did not have hypertension or heart disease before conception.

They stated that doctors treating women of reproductive age should pay attention to even slightly elevated blood pressure as it seems to affect the pregnancy at each stage, but the more elevated it is, the worse the risk.

Women who are trying to get pregnant, they said should get their blood pressures checked and keep it under control with a healthy diet, weight control, regular exercise and in general a healthy lifestyle to ensure a safer pregnancy.

There are many reasons for miscarriage, and often the cause is unknown. But it is common among women with diabetes, hypertension, those with a naturally weak womb and among women who have had a previous history of miscarriage.

The researchers had looked at more than 1,200 women between 18 and 40 years old trying to conceive. They were mostly white and overweight or obese, who had all previously suffered at least one miscarriage.

These women were actually taking part in a clinical trial (Effects of Aspirin in Gestation and Reproduction (EAGeR) trial) where they were given low dose Aspirin (81 mg) to reduce their risk of miscarriage.

The findings, published in the May 2018 issue of the journal Hypertension, indicated that two in three conceived during the six-month trial, with a quarter suffering a miscarriage.

Recurrent miscarriages affect around one in 100 and are defined as the loss of three or more consecutive pregnancies.

Unfortunately, a raised blood pressure before pregnancy is more likely to cause pregnancy loss more towards the end of the pregnancy rather than early in pregnancy if it is not monitored and controlled, said Dr Bukola Adesina, a consultant obstetrician and gynaecologist, College of Medicine, University of Ibadan.

According to Dr Adesina, “high blood pressure in pregnancy can starve babies of oxygen and nutrients. This can cause the baby to die inside the womb when the baby has advanced in age. So it is pregnancy losses towards the end of the pregnancy.”

Although raised blood pressure before pregnancy or during pregnancy is two different conditions, she declared that both can have a negative effect on the baby still in the womb.

“When a woman has raised blood pressure during pregnancy, it can cause pregnancy loss towards the end of the pregnancy. How it does it is that it causes what we call preeclampsia and eclampsia.  Now a woman, who has pre-existing hypertension, also stands an increased risk of having preeclampsia,

Dr Adesina declared that women getting pregnant for the first time, or who have chronic medical illnesses such as pre-existing hypertension or diabetes have increased the risk of hypertension and preeclampsia.

However, Dr Adesina said that hypertension in pregnancy runs in some families, adding that all cases of raised blood pressure before pregnancy or during pregnancy require to be handled by a trained specialist.

“You do not know the way it is going to go, the picture can change between morning and afternoon. The morning, the woman is okay, by afternoon, the woman is critically ill,” she added.

What is more, she reiterated the importance of preconception check-up in averting miscarriages.

She declared: “Now, if a woman has had a pregnancy that is challenged in her last pregnancy; she had elevated blood pressure, eclampsia or stillbirth, ideally, that woman before the next pregnancy should be screened.

“We screen and try to identify risk factors that possibly could prevent pregnancy going smoothly. The public need to know that those with these kinds of risk factors should come to the hospital. Experts also need to start seeing such women early in pregnancy.

“Sometimes you can have the preeclampsia starting at 20 weeks when the baby is very premature, so the damage can start that early. With treatment, one can hopefully reduce the risk of an early unset preeclampsia and even push the pregnancy as far as possible.

“But you must also keep at the back of your mind that there are some women no matter what you do, they may have emergencies. That is why we prepare for everybody.”

Moreover, women that become pregnant while taking blood pressure medication should notify their doctor right away as some blood pressure drugs can be harmful during pregnancy.

Now, this finding that high blood pressure before pregnancy increases the risk of miscarriage comes after a research last year that suggested a blood test could reveal the likelihood of a pregnancy ending in miscarriage.

The test, according to the researchers from the Glasgow Centre for Reproductive Medicine, measures levels of a key hormone that is responsible for maintaining the embryo’s structure and is involved in the release of further chemicals that are critical for a healthy pregnancy.

When the test is taken 15 days into a pregnancy, hormone levels provide an accurate indication of whether the unborn baby will reach its eight-week milestone.

Experts believe the test, designed for women undergoing IVF, but that may be adapted for those conceiving naturally will help couples emotionally prepare themselves for the potential loss of a pregnancy.

200 jetties across the country unmanned —MWUN