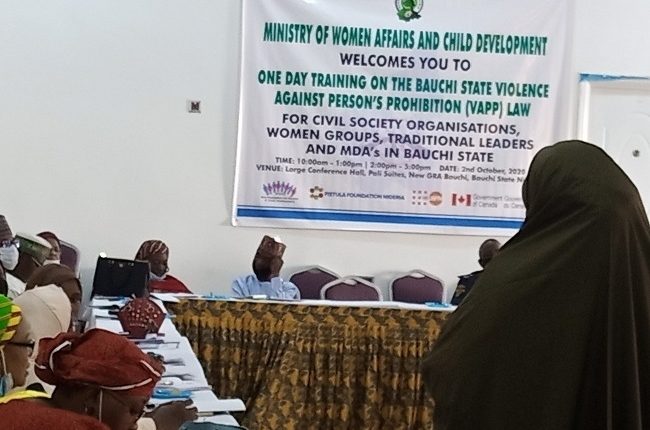 In its determination to have a quality database for checking and monitoring Gender and Sexual Based Violence (GSBV) in Bauchi State, the state Ministry for Women Affairs and Child Development has expressed interest in providing register, templates and guidelines to Civil Society Organisations (CSOs) as well as all Ministries, Department and Agencies (MDAs) in line with the recently signed VAPP law.

The disclosure was made by the Director, Women Affairs in the Ministry, Hajiya Ladi Yusuf during a one-day orientation meeting and inauguration of the working committee of VAPP implementation held at Pali Suites, Bauchi.

Ladi Yusuf said that the Standard Operating  Procedure (SPO) for proper coordination of VAPP would also be adopted by stakeholders and CSOs and service providers in Bauchi State for effective supervision.

She added that “A template will be provided and the Bauchi State technical and coordinating committee will be meeting each month to harmonise all data generated using the template.

CSOs working on GSBV should register with the ministry for women affairs in Bauchi for proper coordination and use of standard operating procedure”.

The Director further said that “The participants were drawn for all the 20 Local government councils. This is to ensure that all GSBV cases and activities are well coordinated using a multi-sectoral approach to end the menace in Bauchi State”.

While inaugurating the committee, the Commissioner for Women Affairs and Child Development, Hajiya Hajara Jibrin unveiled free toll numbers to the general public pointing out that the service providers include; Health facilities, CSOs and security outfits in the state.

In her remarks earlier, the founder of a Bauchi based Non-Governmental Organisation (NGO) named Ikra Foundation for Women and Youths Development, Hajiya Amina Garuba said that the Bauchi State Violence Against Persons Prohibition(VAPP) Law 2020 has spelt out offences, punishments and fines subject to amendment.

She said that the activity was to aid service providers in the process of gathering information from victims for onward prosecution and medical process saying that the participants are expected to step down the training in their respective areas and create awareness on the VAPP law.

The activity was organised by Ministry of Women Affairs and Child Development in partnership with Ikra Foundation for Women and Youth Development as part of the United Nations Population Fund (UNFPA) project on Addressing Gaps in Gender-Based Violence and Harmful Traditional Practices in Nigeria and funded by Global Affairs Canada.