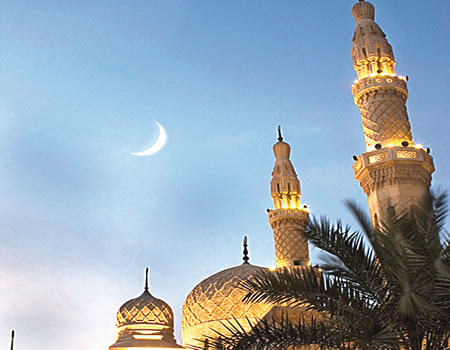 IN the name of Allah, Most Gracious, Most Merciful.

Qur’an, Fath, 48:29, says: “Muhammad is the apostle of God and those who are with him are strong against unbelievers (but) compassionate amongst each other. Thou wilt see them bow and prostrate themselves (in prayer), seeking grace from God and (His) good pleasure. On their faces are their marks (being) the traces of their prostration. This is their similitude in the Taurat and their similitude in the Gospel is like a seed which sends forth its blade, then makes it strong; it then becomes thick and it stands on its own stem, (filling) the sowers with wonder and delight. As a result, it fills the unbelievers with rage at them. God has promised those among them who believe and do righteous deeds forgiveness and a great reward”.

It was in the 19th century that honest thinkers like Carlyle, Gibbon and Goethe perceived intrinsic worth in the religion of Muhammad. Even at the present time, many of our people have gone to his faith, and Islamisation of Europe may be said to have begun.

Also, Reverend R. Bosworth Smith (1794-1884), an American bishop and scholar, notes in his book, ‘Mohammed and Mohammedanism’, London 1874, p. 92, that: “By a fortune absolutely unique in history, Muhammad is the threefold founder of a nation, of an empire and of a religion. Head of State as well as the Church, he was Caesar and Pope in one; but he was without Pope’s pretensions; a standing army, without a bodyguard, without a police force, without a fixed revenue. If ever a man had the right to say that he ruled by a right divine, it was Muhammad, for he had all the powers without their supports. He cared not for the dressings of power. The simplicity of his private life was in keeping with this public life”.

Apart from the fact that Encyclopedia Britannica notes that “Muhammad is the most successful of all prophets and religious personalities’, Professor Jules Wasserman, after extensive scientific research, declares that: “People like Pasteur and Stalk are leaders in the first sense. People like Ghandi and Confucius, on one hand, and Alexander, Caesar and Hitler on the other, are leaders in the second and perhaps the third sense. Jesus and Buddha belong in the third category. Perhaps the greatest leader of all time is Muhammad, who combined all three functions. To a lesser degree, Moses did the same”.

Moreover, great French writer, Lamartine (1854), rhetorically concludes on Muhammad with the Socratic question: “Philosopher, orator, apostle, legislator, warrior, conqueror of ideas, restorer of rational beliefs, of cult without images; the founder of twenty terrestrial empires and of one spiritual empire, which is Muhammad. As regards all standards by which human greatness may be measured, we may well ask, is there any man greater than he?”

Also, Mahatma Gandhi, in ‘Young India’, published in 1924, says, “I wanted to know the best of the life of one who holds today an undisputed sway over the hearts of millions of mankind. I became more than ever convinced that it was not the sword that won a place for Islam in those days in the scheme of life. It was the rigid simplicity, the utter self-effacement of the Prophet, the scrupulous regard for pledges, his intense devotion to his friends and followers, his intrepidity, his fearlessness, his absolute trust in God and in his own mission. These, and not the sword, carried everything before them and surmounted every obstacle. When I closed the second volume (of the Prophet’s biography), I was sorry there was not more for me to read of that great life”.

Dr Keith L. Moore, Professor Emeritus, Department of Anatomy and Cell Biology, University of Toronto, Canada, declares on Muhammad (SAW): “It has been a great pleasure for me to clarify statements in the Qur’an about human development. It is clear to me that these statements must have come to Muhammad from God, because most of this knowledge was not discovered until many centuries later. This proves to me that Muhammad must have been a messenger of God”.

The duo of Edward Gibbon and Simon Oakley in ‘History of the Saracen Empire,’ London, 1870, opine on Muhammad (SAW): “The greatest success of Mohammad’s life was effected by sheer moral force. It is not the propagation but the permanency of his religion that deserves our wonder, the same pure and perfect impression which he engraved at Mecca and Medina is preserved after the revolutions of twelve centuries by the Indian, the African and the Turkish proselytes of the Koran. The Mahomedans have uniformly withstood the temptation of reducing the object of their faith and devotion to a level with the senses and imagination of man. ‘I believe in One God and Mahomed the Apostle of God’ is the simple and invariable profession of Islam. The intellectual image of the deity has never been degraded by any visible idol; the honors of the Prophet have never transgressed the measure of human virtue, and his living precepts have restrained the gratitude of his disciples within the bounds of reason and religion.”

In the opinion of Alphonse de LaMartaine, in ‘Historie de la Turquie,’ Paris, 1854, …”If greatness of purpose, smallness of means and astonishing results are the three criteria of a human genius, who could dare compare any great man in history with Muhammad? The most famous men created arms, laws, and empires only. They founded, if anything at all, no more than material powers which often crumbled away before their eyes. This man moved not only armies, legislations, empires, peoples, dynasties, but millions of men in one-third of the then inhabited world; and more than that, he moved the altars, the gods, the religions, the ideas, the beliefs and the souls. On the basis of a Book, every letter which has become law, he created a spiritual nationality which blended together peoples of every tongue and race. He has left the indelible characteristic of this Muslim nationality the hatred of false gods and the passion for the One and Immaterial God. This avenging patriotism against the profanation of Heaven formed the virtue of the followers of Muhammad; the conquest of one-third the earth to the dogma was his miracle; or rather it was not the miracle of man but that of reason. The idea of the unity of God, proclaimed amidst the exhaustion of the fabulous theologies, was in itself such a miracle that upon its utterance from his lips it destroyed all the ancient temples of idols and set on fire one-third of the world. His life, his meditations, his heroic reveling against the superstitions of his country, and his boldness in defying the furies of idolatry, his firmness in enduring them for fifteen years in Mecca, his acceptance of the role of public scorn and almost of being a victim of his fellow countrymen. This dogma was twofold, the unity of God and the immateriality of God: the former telling what God is, the latter telling what God is not; the one overthrowing false god with the sword, the other starting an idea with words. Philosopher, orator, apostle, legislator, conqueror of ideas, restorer of rational beliefs, the founder of twenty terrestrial empires and of one spiritual empire, that is Muhammad. As regards all standards by which human greatness may be measured, we may well ask, is there any man greater than he?”

Also, James Michener, in ‘Islam: The Misunderstood Religion’, Reader’s Digest, May 1955, pp. 68-70, says: “No other religion in history spread so rapidly as Islam. The West has widely believed that this surge of religion was made possible by the sword. But no modern scholar accepts this idea, and the Qur’an is explicit in support of the freedom of conscience. Like almost every major prophet before him, Muhammad fought shy of serving as the transmitter of God’s word sensing his own inadequacy. But the Angel commanded ‘Read’. So far as we know, Muhammad was unable to read or write, but he began to dictate those inspired words which would soon revolutionise a large segment of the earth: ‘There is one God’. In all things, Muhammad was profoundly practical. When his beloved son Ibrahim died, an eclipse occurred and rumors of God’s personal condolence quickly arose. Whereupon Muhammad is said to have announced, ‘An eclipse is a phenomenon of nature. It is foolish to attribute such things to the death or birth of a human being’. At Muhammad’s own death, an attempt was made to deify him, but the man who was to become his administrative successor killed the hysteria with one of the noblest speeches in religious history: ‘If there are any among you who worshiped Muhammad, he is dead. But if it is God you worshiped, He lives forever’.”

May Almighty Allah continue to shower His blessings and mercy on Prophet Muhammad, Ameen.

Central mosque to hold Walimat Qur’an in Ibadan on Sunday

Sultan, others counsel Muslim women at The Criterion’s conference