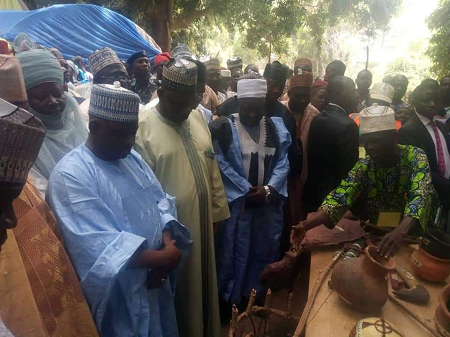 The Governor also said that sustaining cultural values is a veritable means of achieving socio-economic growth towards a better and organised society where respect will thrive.

The Governor stated this in an address at the Fourth Edition of Gwandum Annual Cultural Festival in Gwandum, Kaltungo Local Government Area, held on Saturday, where he was the Special Guest of honour.

The Governor also said that his administration acknowledges the role of culture as a driver of economic diversification, and social integration, assuring that government would do everything possible to ensure the sector receives the desired attention.

He further explained that the administration’s policies on healthcare delivery, quality education, infrastructural development and the ‘Gombe Goes Green’ projects among others, are all geared towards transforming and impacting on, and tapping human, and natural resources for the overall good of the society.

In a message, the Commissioner of Information and Culture, Alhaji Ibrahim Alhassan Kwami, applauded the community for complementing government’s efforts in resuscitating the cultural heritage.

Represented by the Director of Culture, Ms Victoria Usman Mamuda, the Commissioner described staging of cultural festivals as a good development, as it showcases the culture and artefacts for people to take advantage of, for job creation and economic empowerment.

He highlighted the need for communities, to apply culture in checkmating the ugly and negative side of technology on the people, especially the youths so as to save the cultural heritage that is at the verge of extinction.

In his address of welcome, the Chairman of the occasion, Engineer Abubakar Bappa, who is also the Commissioner of Works and Transport, welcomed the dignitaries and enjoined them to enjoy the display of the rich culture and artefacts of Gwandum people.

The Secretary to the State Government, Prof. Ibrahim Abubakar Njodi, and the Representative of the Mai Kaltungo were among the dignitaries who added colour to the festival.

Highlights of the occasion included the display of Cultural dances and artefacts among others as contained in a statement by Special Assistant, Media and Publicity to the Governor, Ismaila Uba Misilli Senior.

I can reclaim my throne if I want –Sanusi