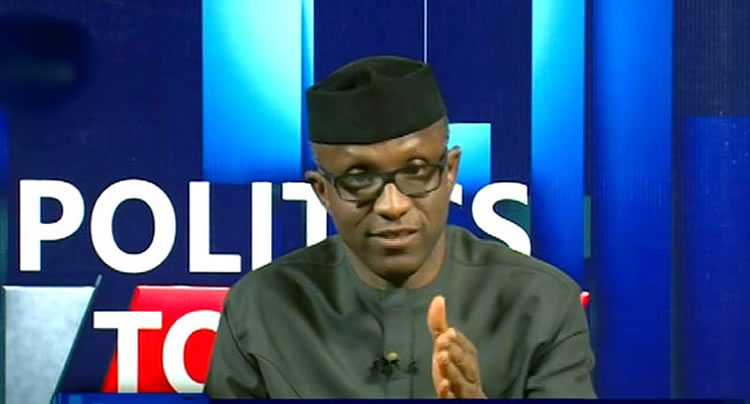 The Federal Government has said its numerous economic policies are designed to positively impact and improve the lives of average citizens.

This was disclosed today by the Senior Special Assistant to the President on Media and Publicity (Office of the Vice President), Mr. Laolu Akande while speaking on CHANNELS TV’s programme POLITICS TODAY in Abuja.

The VP’s spokesperson said, “We’ve designed the largest social welfare programmes on the continent. This is happening for the first time in the history of the country. The Social Investment Programmes (SIP)s have touched the lives of Nigerians on the lowest level of the ladder.”

Akande stated that the positive impact of Buhari government’s Social Investment Programmes (SIPs), which includes the TraderMoni, MarketMoni, N-Power, among others, have been commended locally and internationally, adding that the SIPs have been endorsed by international agencies and credible non-governmental organisations (NGOs).

Beneficiaries of the various schemes under the SIPs are persons “who didn’t know anybody” in government, Akande noted.

“Before we came in, we had a situation where about 20 states could not pay salaries. The Buhari administration had to give all kinds of bailouts to states and local governments at a time when oil was selling for less than $20/barrel.”

Mr. Akande said the Federal Government remains committed to diversification of the economy through job creation and agriculture. “There’s a lot going on in agriculture. A lot is going on in communication and other sectors.”

He also spoke on the Solar Installation component of the Economic Sustainability Plan (ESP) of the Buhari administration. He said the programme will create thousands of jobs for Nigerians, in addition to solving the problem of electricity

Beware Of People’s Anger •Ayodele, Mbaka Warn Buhari In 2021 Predictions
Controversial Catholic priest and Founder of Adoration Ministry, Enugu, Nigeria (AMEN), Reverend Father Ejike  Mbaka, has warned President Muhammadu Buhari about likely uprising against his government, urging him to embark on people-oriented programmes to save his government from going…

As The Clock Of 2021 Begins To Tick… Politicians That May Change The Face Of Nigerian Politics
Year 2020 was dominated by existential threat to human survival occasioned by a global pandemic, the novel coronavirus (COVID-19). The nation lost some of its best and brightest in politics and the corporate world. The anxiety thrown up  by the virus could, however, not deter men of power from plying their vocations…

Letter To Bishop Kukah
Dear Bishop,
WHEN I met you in Calabar three years ago at Southern Senators Retreat, you were still as fresh as the very Father Kukah I met in Lagos in the dangerous days of Sani Abacha when fear reigned over the land. Those were the years the Catholic church whose secretariat you headed led us to pray for Nigeria in distress…

Let’s Talk About S3x, The Kaduna S3x
When audacity of immorality is at issue, the celebrated case of Smith v Hughes is always referenced. It is also used to explain the mischief rule in law. By the 19th century, the English society had become so notorious for the infiltration and embarrassment caused it by commercial s3x workers on the streets of London. Prostitution…

[ICYMI] After 20 Years, Alaafin Visits Soun, Duo Sues For Peace
The duo of Alaafin of Oyo and Soun of Ogbomosoland, Oba Lamidi Olayiwola Adeyemi III and Oba Oladunni Oyewumi Ajagungbade III  have called on Nigerians to embrace peace and harmony in a bid to move the country forward. The visit of the Alaafin to the Soun of Ogbomoso came 20 years after the Alaafin visited the Soun’s palace…

Covid-19 And PTF’s Mandate Extension
The world is faced with a second and potentially more malicious wave of the coronavirus pandemic and countries are frenetic in their efforts to curtail the spread. Added to the new wave is a new strain of the virus that has been reported to have the propensity to spread faster than the original one. While it may not…