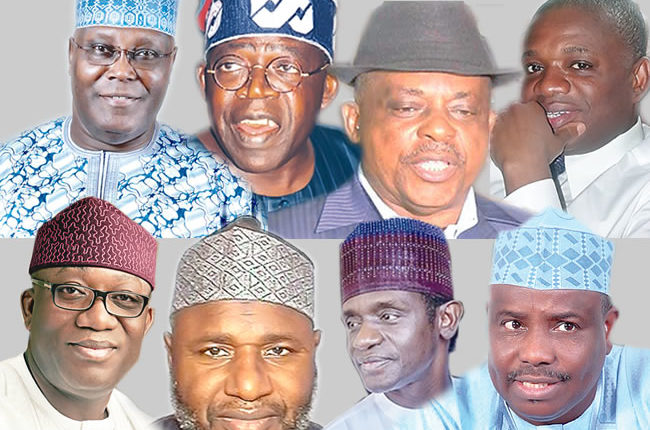 Year 2020 was dominated by existential threat to human survival occasioned by a global pandemic, the novel coronavirus (COVID-19). The nation lost some of its best and brightest in politics and the corporate world. The anxiety thrown up  by the virus could, however, not deter men of power from plying their vocations and playing politics to court attention. In the New Year, certain individuals will shape the polity by their actions and pronouncements. TAIWO AMODU unveils the politicians to watch in this New Year.

Former Lagos State governor, leader of the defunct Action Congress of Nigeria, played a significant role in the formation of the erstwhile main opposition party, the All Progressives Congress which won the 2015 general election, displacing the Peoples Democratic Party which had the central government under its grip for 16 years.

Despite the turmoil in his party and speculation that he would ditch President Muhammadu Buhari for a second term, Tinubu retained his role as kingmaker,  ensuring that his South-West delivered the votes for a fresh mandate for Buhari.

Amidst denial from his camp, the kingmaker is planning to be king  in 2023. But his Man Friday and chairman of the APC, Comrade Adams Oshiomhole, was sacked as national chairman at an emergency National Executive Committee meeting held last June at the Presidential Villa which dissolved the National Working Committee (NWC)  led by the former president of the Nigeria Labour Congress.

Another power block led by the APC governors is now in charge of the party national secretariat with one of them, the Yobe State governor, Mai Mala Buni,  as chairman of an interim committee.

Tinubu›s camp has also been decimated in the South-West as some of his protégés have since settled for a different alliance outside Tinubu›s  South-West stronghold  in the amorphous APC. Despite the mounting challenges against his ambition, will Tinubu openly declare  his presidential intention or throw in the towel?

Former National Secretary of the APC and Yobe State governor, Mallam Buni, emerged as the chairman of the APC Extraordinary Convention Planning Committee (ECPC) last June sequel to the dissolution of the NWC led by Comrade Oshiomhole by the APC National Executive Committee (NEC).

Despite opposition from a certain power block which lost out last June following Oshiomhole›s removal, the NEC at another meeting  held last December passed a confidence vote in the Governor Buni interim leadership and extended its tenure. The NEC equally dissolved the party organs at ward, local government, state and zones while fresh congresses would be conducted ahead of the national convention to hold in June 2021.

The new set of national officers to emerge this year will conduct the presidential convention where the party presidential candidate for the 2023 general election will emerge.

It is an open secret  that some of Buni›s colleague are nursing presidential ambition. Will he deliver a transparent state congresses and national convention or do the bidding of his colleagues in the Progressives Governors Forum? Nigerians, expectantly, will wait for the answers.

The Zamfara State governor was pronounced as governor, not by ballot but by the pronouncements of the Supreme  Court which declared the APC ineligible to field candidates for the March 2019 general election since it did not conduct valid primaries.

Justice  Paul Galinji, who read the unanimous judgement of the five man panel,  held that the Zamfara APC failed to conduct primaries in accordance with the party’s constitution, the Electoral Act and the 1999 Constitution respectively. The apex court ordered  that all political parties whose candidates scored the second highest votes in the elections and the required spread should be declared winners.

There has been indication that the PDP still nursing its wounds, following the defection of the Ebonyi state governor, David Umahi, to the ruling party would lose the Zamfara governor to the APC.  Matawalle, in a statement by his media aide, Zailani Baffa, issued last November, had commended his Ebonyi counterpart for dumping the PDP. He claimed «bad blood» was responsible for Umahi›s defection. But the import of his message  was not lost on the top echelon of his party.

Matawalle had said: «If this trend of generating bad blood amongst us continues unabated, our great party will increasingly be on the receiving end as we move towards the year 2023. I am having a very bad experience of late from some of my PDP governor colleagues, which I still find very puzzling.”

The National Chairman of the PDP, Prince Uche Secondus, has been facing opposition from certain chieftains of the party in the last one year. Ahead of the 2023 presidential race, chieftains of the party from South-West and the South-East geopolitical zones want a clear statement from the PDP NWC led by Secondus and a clarification from the NEC on where the pendulum would swing for the presidential ticket.

Ebonyi State governor, Umahi,  who recently defected to the APC, alleged that the cat and mouse game in the main opposition party over zoning of its presidential ticket was responsible for his defection to the ruling party. However, the report of the Senator Ike Ekweremadu post-election review committee submitted in 2015 to the party had zoned the 2019 presidential ticket to the North. Incidentally, Secondus, who had since emerged as national chairman, was the acting chairman who received the Ekweremadu report.

Those anxious that the South takes the PDP presidential ticket in 2023 are agitating for an arrangement that would take the exalted office of National Chairman from the zone. Will Prince Secondus, from Rivers State in South-South geopolitical zone, seek a second term as PDP chairman in December 2021 when the party›s  convention will be held? This is an answer that will unravel in the fullness of time.

He was in the news recently following his defection to the APC. Pummelled on all fronts by his  aggrieved  colleagues in his former platform, the PDP, the Ebonyi governor denied any presidential ambition. He maintained that he dumped the PDP because of its failure to consider the South-East for its presidential ticket.

He said:»I have to lead the protest against the marginalisation of the Igbos by the PDP and I don’t have to consult anybody to lead such a protest.

“I don’t want the PDP to collapse in the South-East but it can collapse itself in the zone if it does not heed the peoples’ advice to entrench justice, fairness, and equity.»

Indication, however, emerged during the week that Governor Umahi has his eyes on the topmost political office in the country. Ebonyi State deputy governor, Kelechi Igwe, had asked his boss to consider running for the presidency in 2023. According to media reports, he made the demand when he led members of Ebonyi State Executive Council to the governor at the latter›s hometown at Uburu, Ohaozara Local government Area (LGA).

Former vice-president and PDP presidential candidate in the last general election, Alhaji Atiku Abubakar, still nurses a presidential ambition. While others in his party keep their plan to their chests, Atiku›s ambition remains an open secret.

Former governor of Zamfara State has since declared his 2023 presidential ambition. A confidant of the incumbent President Muhammadu Buhari, Sani Yarima had challenged those with claim of an understanding or  agreement amongst leaders of APC to zone the presidency to the South to produce the evidence.

He maintained that the constitution of the country declares no one ineligible for the exalted office on the basis of his place of birth or geopolitical zone.

Apart from Senator Tinubu, another chieftain of the APC in the South-West whose name has consistently been dropped as having an eye on the presidency in 2023 is the former Minister of Mines and Steel Development and incumbent governor of Ekiti State, Dr Kayode Fayemi.

It is an ambition that he continues to deny in the public space. The turmoil in the South-West chapter of the APC has longed been attributed to an alleged gang-up against Tinubu by the trio of Ondo State governor,  Rotimi Akeredolu,  immediate past Ogun State governor,  Senator Ibikunle Amosun and Governor Fayemi.  Following the ouster of Comrade Oshiomhole as national chairman of the APC, the Ekiti State governor and Bola Tinubu were embroiled in power tussle over the right successor to the office of Deputy National Chairman,South of the party vacated by former Ekiti Ctate governor, Chief  Niyi Adebayo, having been appointed as Minister of Trade and Investment in the Federal Executive Council.

While Tinubu backed the late Isiaka Ajimobi for the office, a majority of the APC governors lined behind Governor Fayemi in his opposition to the choice of the late Oyo State governor.

In 2021, barely two years to the presidential contest, will Fayemi sustain his public disclaimer of a presidential ambition? Will he support the open-secret  ambition of Tinubu?

Former Speaker, House of Representatives and sitting Sokoto State governor, Right Honourable Aminu Tambuwal, has equally been in the news: as one of those gearing to succeed Buhari in 2023.

Tambuwal dumped the APC on the eve of 2019 general election and returned to the PDP. He managed to retain his seat. His studied silence on his presidential ambition has been smoothened for him by those who flaunt the logic that no one from the North or by extension,  Buhari›s North-West should nurse  the ambition to succeed the incumbent from Katsina State.

Silence is a weapon in politics. Whether or not he will run for the topmost nation›s office is yet to be seen, but the urbane politician has continued to oil his vast network ahead of next general election, building bridges of friendship across the geopolitical zones while the zoning controversy rages.

Two-term Abia State governor is the Chief Whip of the 9th Senate. Kalu proved bookmakers wrong when he emerged as Chief Whip against claim that  a «fresher» could not take any position  as principal officer in National Assembly.

The former Abia State governor hosted politicians in his Igbere country home last December on the occasion of the remembrance of his late father. It was a gathering of individuals of reckoning in Nigeria.  Kalu has been a consistent advocate of Igbo Presidency. To the consternation of his ardent  supporters, he joined the league of anti-zoning camp in his APC.

Kalu at the Minna residence of General Abdulsalam Abubakar last September declared that the 2023 Presidency is an open race.

“Most people are not aware that there is no zoning of the position of the president in the constitution of the APC; Nigerians from every part can contest for the office of president,” Kalu stated.

The Chief Whip of the Senate  made his declaration  before the Umahi defected to the APC.  Will he recant on his anti- zoning outburst when his colleagues from his South-East zone show interest in the exalted seat? Is Kalu a compromise candidate for vice-presidency slot for his zone? Though the year is just starting, how some of these scenarios play out will determine who eventually gets what.

Clock of 2021: Issues that will shape Nigerian politics