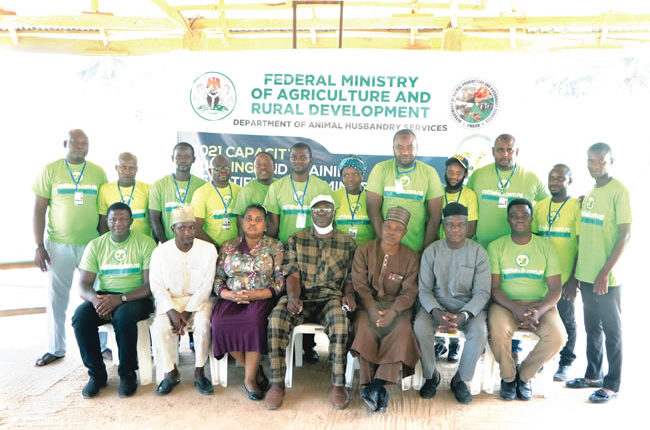 THE Department of Animal Husbandry services, Federal Ministry of Agriculture and Rural Development, alongside Real People Concept Cattle Hub, in a bid to improve livestock production particularly in the area of cattle, recently put together a two-week intensive training for artificial inseminators.

“Our dairy cattle have no genetic potential to produce more than one to two litres of milk per day. But we are trying to upgrade and in the process of upgrading, we are going to need artificial inseminators. These artificial inseminators would carry the business to the dairy farmers to help in inseminating their animals.

Commenting on plans by the ministry not to allow the knowledge acquired by these artificial inseminators to end at the venue of the training, Onipe said:” The ministry has procured motorcycle for each of them. Everyone of them will get complete mobile artificial insemination kit which they can use in the process of doing their work.

“We have also deposited 135 litres nitrogen tanks for the storage of semen in their states. So, with these they can easily access semen; they have motorbike to take them to wherever they are going to do the insemination. They have the AI kit with which to do the job, so they are completely equipped to do the job.”

Also speaking with the Nigerian Tribune, Managing Director, Real People Concept, Mr Tunmise Olagbaju, said:”The Federal Government has been involved in a lot of intervention programmes on livestock breed improvement and the department of animal husbandry services has engaged us in the last two weeks to train inseminators drawn from six states across the country.

The Training is very rich, the resource persons were well coordinated and I think it is the right step in the right direction, because it will go a long way in addressing the issue of farmers/herders crisis in the country if truly what we will learn will be put into practice.