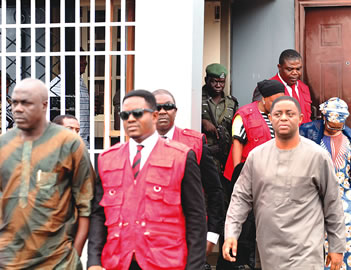 Fani-kayode, who was also former Director of Media and Publicity, campaign committee of ex-President Goodluck Jonathan, is charged alongside a former Minister of Finance, Nenandi Usman, and Danjuma Yusuf.
They are charged by the Economic and Financial Crimes Commission (EFCC) on 17 counts bordering on the offence and had all pleaded not guilty to the charges.

He told the court that he was the new counsel in the suit having only been briefed on Sunday, adding that he required time to study the case file and get abreast with the issues.
Quakers also sought leave to meet with the judge in chambers to confer on some issues.

He said it will be tidier to see the judge in chambers, adding that the prosecution and other counsels could join in the meeting since there were no secrets to hide.
In response, the prosecutor, objected to the request for adjournment on the grounds that it was a mere ploy to delay trial.
Anana informed the court that the business of the day was for continuation of trial and that his witnesses were already in court.

“This is a technical way of asking for an adjournment. I have seniors in this matter and so I don’t think I am the proper person to come to for any meeting in the chambers.
I said earlier that we are ready to go on and I did not ask for any adjournment, so if there is a call for any meeting, I will not be a part of that meeting,” asking the court to proceed with trial.

Counsel to the second accused, Mr Ferdinard Orbih (SAN), lending his voice to the prayer of Quakers, urged the court to allow the new counsel ample time to study the case file.

According to him, it is in line with the principle of fairness as enshrined in the constitution especially in relation to criminal matters, to grant the prayers of Quakers, since he was just briefed.

Orbih noted that the entire provisions of the Administration of Criminal Justice Act taken as a whole, cannot supersede constitutional provisions on fair hearing.

He reminded the court that the suit was a criminal one, and that the goal of the court must be to attain justice in every respect.

He, therefore, urged the court to give the application a favourable consideration.

Orbih also drew the court’s attention to two of his application seeking a release of the second accused’s international passport, as well as seeking for a more convenient venue for trial.

In a short ruling, Justice Muslim Hassan, said he would grant an adjournment till January 17 (Tuesday) to enable the new counsel study the case file, before proceeding with trial.

He said that the matter was earlier fixed for three days; Jan. 16, 17 and 19, but that Monday’s date will be vacated to enable the new counsel get acquainted with the facts.
On the request to see the judge in chambers, Hassan held, “on the request to meet the court in chambers, with respect to learned counsel, I cannot grant same.”
The judge urged counsel to make a formal application and put forward his thoughts in writing.

He thereafter adjourned the matter till Tuesday, January 17 for continuation of trial.

Crime Control: Ondo to enforce use of reflective jackets for okada riders