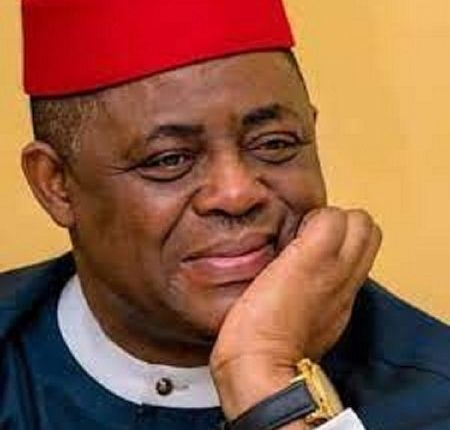 The Governorship Candidate of All Progressive Congress (APC), in the forthcoming November 6, 2021, Anambra State gubernatorial election, Senator Andy Uba, has described the defection of a chieftain of the People Democratic Party (PDP), Chief Femi Fani Kayode, into APC, as a move in the right direction.

He said the development is a further signal that the APC is winning the Anambra election and the 2023 general election respectively without hitches.

Fani Kayode, the former Aviation Minister, on Thursday, joined the ruling All Progressive Congress (APC), to maintain his political carrier, said he was moved by the Holy Spirit to join the ruling party.

The politician equally added that he was instrumental to three PDP governors decamping to the APC as he was formally presented to President Muhammadu Buhari as a member of the ruling party.

Speaking further, during the official endorsement of his candidacy as the next governor of Anambra State, by a Political group, Afa Igbo Bu Ofu Movement, formally controlled by the state ruling All Progress Grand Alliance (APGA), Uba, assured Chief Fani-Kayode of more political prosperity in the APC platform.

In the endorsement ceremony, Uba said that his mission and that of the APC as a national political party is to liberate Ndi-Anambra from the pains of the poor road network, unemployment, insecurity, lack of adequate electricity supply and poor learning environment.

He told the supporters that APC is the only party that could connect the state to the centre (Abuja), to end the aforementioned challenges.

According to him, the only way Ndi-Igbo could benefit more from the Nigeria national cake was to join the national party, APC.

“To be honest with you gentlemen/ladies of the press, there is nothing as sweet as a state government is with the central government in any democratic dispensation. And this is why I am contesting to connect the good and hard-working people of Anambra State into the national grid.

“As I speak to you now, rehabilitation of the damaged portion of Amansea, Hausa Settlement of the Enugu-Onitsha highway is ongoing, under my order. And I promised, if elected as the next governor, no resident in Anambra State will experience any form of hardship again,” Uba pledged.

Uba assured the supporters that he would win the governorship election, if “the process is conducted in a free, fair and transparent manner.”

While endorsing Andy Uba, the National leader of the group, Mr Onyedika Chukwuma, said the endorsement was to ensure that APC emerged winner of the poll, to enable them to have their share from the national cake.

Mr Chukwuma mentioned legacy projects being executed by President Mohammadu Buhari administration, including the ongoing construction of the Second Niger bridge, construction and rehabilitation of Enugu-Onitsha Expressway among other infrastructural development projects in the South-East zone, insisting that APC had brighter chances of winning in the coming governorship poll.

Fani Kayode’s defection, a move in the right direction

In spite of the huge investment in the water sector by the government and international organisations, water scarcity has grown to become a perennial nightmare for residents of Abeokuta, the Ogun State capital. This report x-rays the lives and experiences of residents in getting clean, potable and affordable water amidst the surge of COVID-19 cases in the state.  Fani Kayode’s defection, a move in the right direction

My plans for Anambra State College of Health Technology –Provost