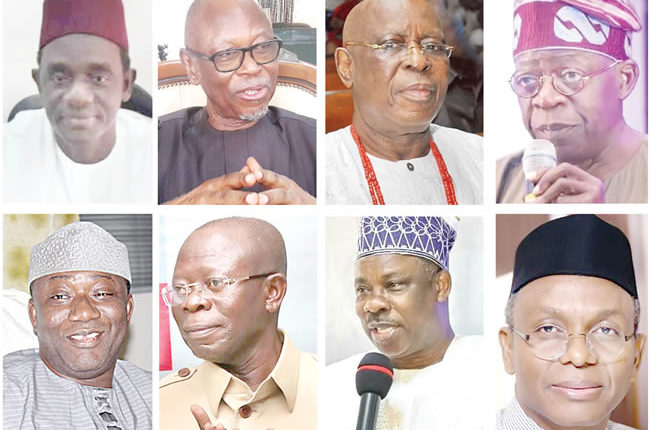 As the ruling All Progressives Congress (APC) steps up its programme of reforms under the party’s current interim national leadership, KUNLE ODEREMI writes on the forces and counter-forces that will be at work during its membership re-validation and registration exercise beginning next Monday across the country.

THE phased battle for the separation of the boys from the men is already in an upward swing in the ruling All Progressives Congress (APC). From Monday, the major stakeholders will begin to stake their pride in the quest to control the main structures of the seven-year-old party, as it commences the membership re-validation and registration across the country. It is an opportunity for the power centres to showcase their strengths and capabilities in political brinkmanship and deftness. As from January 25, 2021, old power brokers will try to consolidate their grip on the lever of the party in their strongholds. Others will attempt to break down the walls erected by supposed godfathers that have promoted politics of non-inclusion.

There are yet other APC stalwarts, who will be determined to assert their authority after a brief sojourn in other parties or as fresh party chieftains that defected from, especially, the main opposition Peoples Democratic Party (PDP). Underling issues in the exercise expected to gulp huge logistics are subsequent polls, especially the 2023 general election and ultimately, individual political aspirations. And Presidential and governorship hopefuls, as well as their foot soldiers are involved in intense horse-trading. Names of a few political juggernauts are making the round; the individuals are at the verge of proclaiming their individual presidential ambitions. To put themselves in better stead for contention in the race, they are not leaving their flanks open for encroachment by rival camps as the clock ticks ahead of 2023. Ability to hold onto constituencies constitutes a major bargaining power as the contest for power at the higher level peaks. Even those that are eyeing the position of vice presidential ticket won’t be left out because they will need to prove their possession of compact base as part of negotiation chips.

Nonetheless, the intensity of the struggle among the major stakeholders in the APC to stamp their individual or group interest and authority during the period of the compilation of the membership register is bound to vary from zone to zone. From the look of things, the friction and other tendencies that will manifest during the exercise might not be so intense and pronounced in the South-East despite the stringent clamour by the zone to produce a president of the Igbo extraction in 2023. With its strong inclination for the PDP and the All Progressives Grand Alliance (APGA) over the years, the possibility of a sudden paradigm shift in the South-East is largely hypothetical.

The list of those juggernauts that constitute the backbone of the APC in the zone at the moment comprises the Minister of Labour and Employment, Dr Chris Ngige; Governor Hope Uzodimma of Imo State; his estranged predecessor, Senator Rochas Okorocha; the Senate Chief Whip and former governor of Abia State, Senator Orji Uzor Kalu; Minister of Foreign Affairs, Geoffrey Onyema; Senator Ayogu Eze; Araraume; Andy Uba and Director General of Voice of Nigeria (VON), Osita Okechukwu. The governor of Ebonyi State, Dave Umahi, joined the fold with his defection to the ruling part recently. That notwithstanding, the leading lights in the APC from the zone currently holding elective and appointive public offices will try to redefine the political space of the South-East against the backdrop of the Igbo presidency project. In that regard, the APC collectives from Ebonyi State comprising Governor Umahi, Dr Onu, and others are part of the arrowheads.

However, there is a greater attention on the APC membership exercise in the South-West because of the strong affinity of the region with the party. Many of its main stakeholders are from the zone, including a national leader, Senator Bola Tinubu; incumbent vice-president, Professor Yemi Osinbajo, and the governor of Ekiti State, Dr Kayode Fayemi, all of whom are being touted as presidential hopefuls. According to some observers, four distinct power blocs have since emerged in the southWest APC in the buildup to the politics of 2023:  governors that owe allegiance to a powerful tendency in Lagos APC; serving and former governors in another, the pro-Osinbajo loyalists and the pro-establishment camp comprising a few politicians holding appointive offices and members of the National Assembly. Then, there is the fifth block consisting members of the National Assembly, who appears caught between the deep blue sea and the devil because of the awesome influence of governors in their states.

For the South-South, Edo, Rivers and Akwa Ibom form the focal points because of the pedigrees of APC stalwarts from the area. Edo is considered a potential flashpoint during the forthcoming exercise. The event is the veritable opportunity for two former APC national chairmen, Chief John Odigie-Oyegun and Comrade Adams Oshiomhole to re-launch themselves to the Olympian height of political godfathers and influencers after their party was humbled in the last governorship poll in Edo.  Bugged down by the act of shenanigan that trailed the choice of candidate for the poll, the party and all its leaders are in disparate moves to shove aside perceived renegades in their midst and end power disequilibrium. Money, raw power, logistics and brinkmanship and other major factors will be on display discreetly or otherwise.

In the North-Central, traces of the uncanny power struggle gained ascendancy lately with the dramatic twist of events in Kwara State APC as the most pronounced. Governor  Abdulraman AbdulRasaq of Kwara State and the Minister of Information and Culture, Alhaji Lai Mohammed, are resolute in their individual bid to control the structures of the party in the state, while Governor Yahaya Bello in neighbouring Kogi State fends off rivals to hold tight to the ace in the state chapter of the APC. It is almost certain that everything could be at his call and beckon during the membership re-validation and registration exercise. Governor Solomon Lalong needs to muster all that is required to maintain his hold on Plateau State APC structures.

The contest in Katsina State appears seamless being the home state of President Muhammad Buhari. As a mark of respect for him and his office, other main influencers, including the state governor, Aminu Bello Masari might not want to rock the boat. But the same trend and scenario cannot be said concerning Kaduna State, where Governor Nasir el-Rufai and a number of other APC leaders are in a consistent cold war. His perceived adversaries in the party, including vocal Senator Shehu Sani, the face of APC opposition within, provides the veritable ground to settle a prolonged political score and supremacy. Gombe, Plateau, Niger, Benue, Kano, also include the real battle ground in the scramble for APC structures.

In Bauchi, the picture is gradually emerging on the most likely alterations and reconfiguration in the existing power locus in the APC state chapter. The return of a former Speaker of the House of Representatives, Honourable Yakubu Dogara, according to pundits, could be catalytic in the envisaged dynamic change in configuration.

An apparently embittered member of the Lagos State chapter of the party, Honourable Faoud Oki, summed up the expectations of party faithful in the state on the coming exercise: “We are supposed to have a robust register; what we have is a bastardised register, and I think that is why it is imperative now for us to have fresh membership registration that will indicate very clearly who the party members are.” Similarly, the Edo caretaker committee chairman of the party, Colonel David Imuse (retd) said: “The old has passed away, anybody joining now will be treated, accepted and integrated in line with the traditional hospitality of the APC. There are no old or new members; we are all joiners.” He added: “The APC has become the party of choice for many across Nigeria and Edo in particular because all too soon it has become obvious that the party it is a party with legitimacy and credibility that cannot be bought with a mess of porridge.”