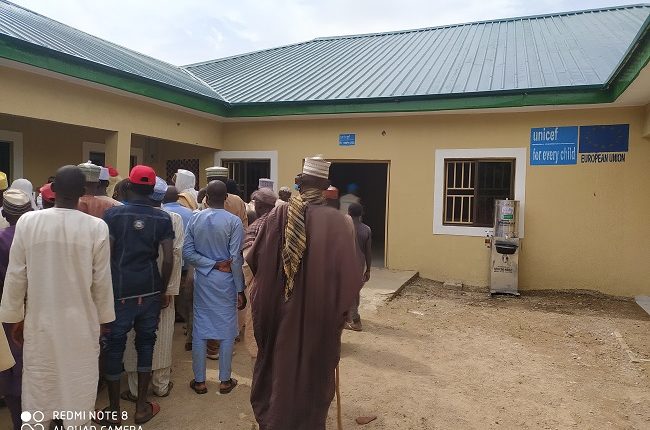 Bauchi Field Office of UNICEF has reiterated its commitment to improving the health status of the populace through effective collaboration and teamwork.

The assurance was given by the Chief of Bauchi UNICEF Field Office, Bhanu Pathak, while commissioning and handing over two PHCs constructed and equipped by EU-UNICEF collaboration at Tudun Wada and Ganji villages in Warji LGA of Bauchi on Thursday.

With the handing over of the facilities, Residents of Tudun Wada and Ganji, two of the hard-to-reach {HTR) communities in Warji LGA of Bauchi State can now heave a sigh of relief as they have easy access to quality health care services.

The facilities were, on Thursday, commissioned and handed over to the communities through the Bauchi State Primary Health Care Development Agency (BASPHCDA) and Warji LGA which is to ensure that the PHC served the purpose for which it was established in the first place.

While commissioning and handing over the facilities at Tudun Wada and Ganji villages, UNICEF, Bauchi Chief of Field Office, Bhanu Pathak said that the projects were conceived by the need to ensure that healthcare delivery was brought down to the doorsteps of the people particularly those in the rural areas that are hard to reach.

Bhanu Pathak said that the facilities in Tudun Wada and Ganji were one the several others embarked upon by the EU-UNICEF collaboration as well as equipping of others across the state in the resolve to making healthcare easily accessible to the communities.

The UNICEF, Bauchi Chief of Field Office then appealed to the state government to effectively manage the facilities very well because according to him, the Tudun Wada PHC is one of the Centers of Excellence in the state.

He enumerated the various interventions by UNICEF and other donor agencies for the good of the state saying that without such, the government alone cannot do it calling for more of such collaboration.

Rilwanu Mohammed further said that UNICEF has been in the forefront of supporting the government stressing that the intervention has really improved on the health sector.

He then sounded a note of warning to the officials of Warji LGA to take care of the facilities for effective service delivery saying that, “we will hold you responsible for damage to the facility as well as the loss of any of the equipment installed.”

In his remarks, Head of Admin, Warji LGA, Abubakar Ibrahim Mohammed, described the development as a good move that will ensure that healthcare delivery was brought close to the grassroots dwellers.

Represented by the Director, Health of the Council, Habila Wakasso, the Head of Admin assured that the Council will ensure that the facilities were put to effective use as well as maintain it on a regular basis so that the aim of its establishment will not be defeated.