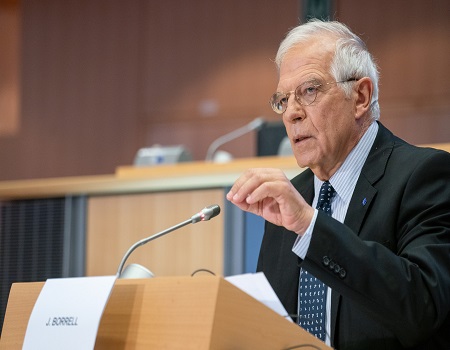 Earlier, US President Donald Trump presented a long-awaited proposal to address the bitter decades-long conflict at the core of tensions across the Middle East.

Trump’s plan would give Israel control over Jewish settlements on the West Bank and the strategic Jordan Valley, while also calling for the creation of a Palestinian state.

This, Borrell said, differs significantly from the 1967 borders that had previously been the basis for peace plans.

Borrell stressed the EU’s commitment to a two-state solution based on 1967 lines, with “equivalent” land swaps and the establishment of an independent, viable Palestinian state alongside Israel.

“The US initiative, as presented on January 28, departs from these internationally agreed parameters,” he said.

Borrell’s initial reaction to the plan had been a lot more cautious, stating merely that the EU would

“study and assess” the US proposals on the basis of its “established position.”

Trump’s plan, unveiled during a visit to Washington by Israeli Prime Minister Benjamin Netanyahu, has been rejected by the Palestinians and by the Arab League while triggering protests in the region.

The plan include: a lengthy timeline for the establishment of the Palestinian state and envisions limited sovereignty.

The fledgeling state would be surrounded by Israel, with Jerusalem under Israeli control, while granting all religious groups access to their holy sites.