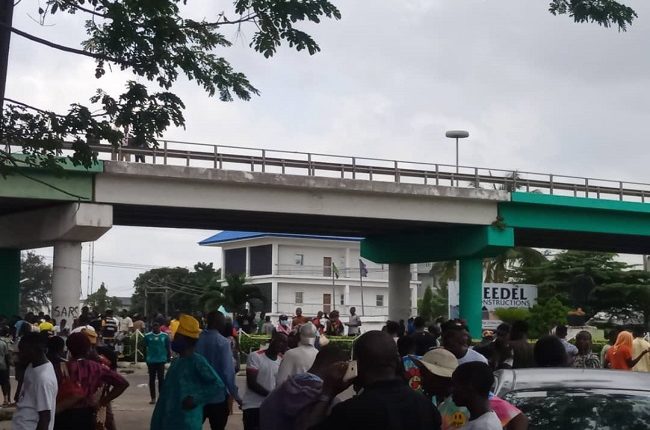 At about 10:53 am, the #EndSARS protesters took over the road at the exit gate of Central Bank of Nigeria (CBN).

The protesters commenced the peaceful rally barely 10 minutes after the Dynamics Church’s Prayer Walk which lasted for about 30 minutes.

The protest which started with about 50 youths, gradually grows by number.

Some of the protesters also blocked part of the road with their vehicles, as they dare the security operatives to hurt them.

There was a mild disagreement among the protesters as some of the ladies persuaded their male counterparts to come into the Ecumenical centre gate.

But all entreaties to get them off the road proved abortive, as the male protesters swore not to succumb to any persuasion.

They also told the Police personnel who they described as the major beneficiaries of the nationwide protests that all the struggle was for the improved well-being of the police and their families.

At about 11:09 am, some of the armed policemen took over the gate of the Ecumenical centre to prevent entry by some of the protesters.

A-Bate meets Marly on ‘This is it’