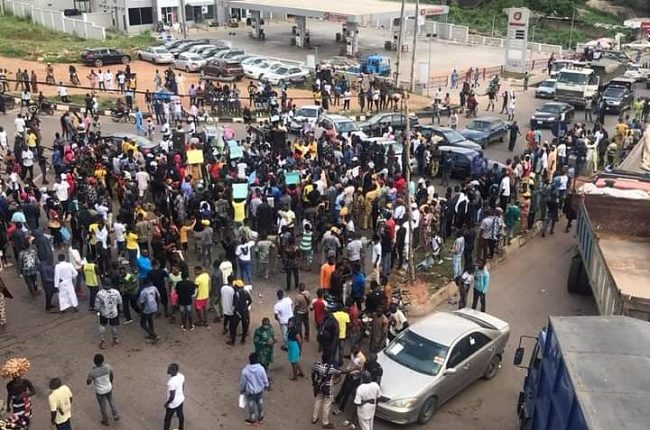 Abeokuta, the Ogun State capital, was on Friday, grounded by thousands of youths in continuation of #EndSARS protest in the state.

The protesters had converged at the Nigerian National Petroleum Corporation (NNPC) junction leading to the government secretariat and Abiola way in the early hours of the day.

They blocked major roads leading to major areas in the state, as hundreds of motorists travelling outside the State were stranded on both sides of the road.

Many government workers trekked down to their offices at Oke-Mosan as the protesters prevented people to get to their destinations.

The protesters at the time of filing this report had blocked the Ibara roundabout at Panseke area of the state .

The All Progressives Congress (APC) has told a Federal High Court in Abuja, that the Comrade Adams Oshiomhole-led National Working Committee (NWC) was sacked to solve the internal leadership crises rocking the party…#EndSARS protesters

The party also said that immediately the Caretaker/Extraordinary Convention Planning Committee was put in place after the NWC’s dissolution, the crises that had characterised its affairs were laid to rest…#EndSARS protesters

The Emir of Zazzau, in Kaduna State, Alhaji Shehu Idris has died in his palace at the age of 84…#EndSARS protesters

His son, Aminu Shehu Idris, confirmed in an interview with the Tribune Online that his late father who was appointed on 15th February, 1975 and spent 45 years in the throne died on Sunday after a protracted illness…#EndSARS protesters  #EndSARS protesters