EditorialEndSARS
By Tribune Online On Oct 22, 2020 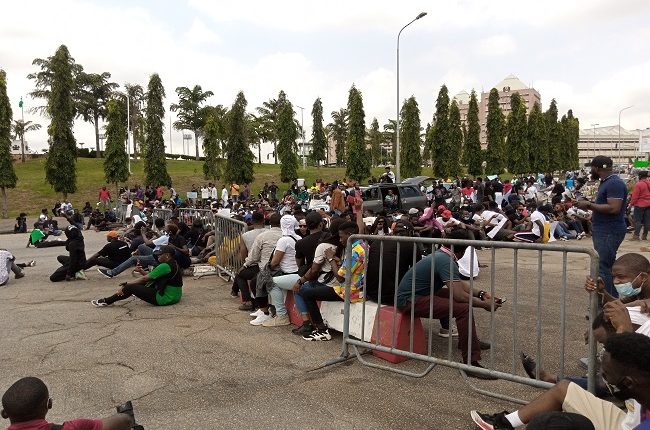 AT this very moment, the country, following years of hollow promises of police reform, is engulfed in violence as the popular #EndSARS protests spiral out of control. This week, hoodlums taking advantage of the protests invaded two prisons in Benin, Edo State, setting 1,993 inmates free. They burnt the Bus Rapid Terminal (BRT) station in Oyingbo, Lagos and the Nigerian Ports Authority (NPA); razed popular television station, TVC, the Lagos headquarters of The Nation newspapers, and police stations across the country following the killing of protesters. Among other barbaric acts, the hoodlums torched the palaces of the Soun of Ogbomosho, Oladunni Oyewumi and the Oba of Lagos, Rilwan Akiolu. Prior to the violent turn still being witnessed across the country, the #EndSARS protests had captured the global imagination, with highly placed individuals from around the world identifying with the pains and pursuits of the protesters and calling on the Nigerian government to ensure that their demands were met. Indeed, since the return to civil rule in 1999, there is hardly any issue on which Nigerians have expressed unanimity of opinion like the #EndSARS protests. Political, ethnic and religious affiliations were set aside as the nation’s youths and its other populations spoke out forcefully against years of police terrorism.

Amid the raging protests, the Inspector-General of Police (IGP), Mr. Mohammed Adamu, dissolved all SARS formations, saying that new policing arrangements to address the offences of armed robbery and other violent crimes that fell within the mandate of the dissolved unit would be presented in due course. On its part, the presidential panel on the reform of SARS accepted the five-point demand of the #EndSARS protesters, including the release of all persons arrested and justice for victims of police brutality, setting up an independent body to oversee the investigation and prosecution of all reports of police misconduct (within 10 days); psychological evaluation of all disbanded SARS officers before redeployment, and increment in the salaries of police personnel. According to presidential spokesman, Femi Adesina, who read the communiqué issued at the end of the panel’s meeting, the forum welcomed the dissolution of SARS, reaffirmed the constitutional rights of Nigerians to peaceful assembly and protest, and affirmed the sanctity of life of every Nigerian and the role of the police in protecting this right. It also indicated that reform proposals would be based on the Constitution of the Federal Republic of Nigeria and existing legislations such as the Nigeria Police Act (2020), the Nigeria Police Trust Fund Act, 2019, the Administration of Criminal Justice Act, 2015 the Anti-Torture Act, 2017, and the National Human Rights Commission Act, 2010, amongst others.

In addition, the forum called for immediate steps, including an order  to all state police commands to halt the use of force against protesters; unconditional release of arrested protesters and citizens; and open communication and outreach to citizens to establish trust and confidence, and a roadmap for the implementation of the White Paper of the Presidential Panel on the Reform of the SARS. It welcomed the proposal to set up an Independent Investigation Panel to look into the violations of human rights by the defunct SARS and other segments of the Nigerian Police, agreed to the setting up of this panel by the National Human Rights Commission (NHRC) within one week, and called for memoranda from members of the public whose rights had been violated by the defunct SARS and other segments of the police. In addition, it recommended the psychological evaluation, training and retraining of disbanded SARS officials prior to redeployment, and set up technical sub-committees to design an implementation road map and work plan for the implementation of the White Paper, including those on training, capacity and re-orientation, logistics, infrastructure, communications and technology, arrest, detention, and investigations; regulations, oversight and accountability and financing and partnerships.

However, these committees were yet to take any meaningful action when the IGP announced the formation of a new unit, the Special Weapons and Tactics (SWAT) unit, to replace SARS. And when the Nigerian Governors Forum (NGF) held a meeting with him to intimate him with the fact that the new unit did not resonate well with Nigerians, and should be postponed until a more auspicious time, he stuck to his guns, further inflaming passions in the polity and reinforcing the widely held suspicion that the disbandment of SARS was a gimmick by the government to buy time and continue police brutality under a new garb.

Sadly, as the protests continued, it became quite apparent that manipulative actions were being deployed. Perhaps the most eloquent testimony of this subterfuge was the action of so-called hoodlums ferried to safety in unmarked vehicles after brutal attacks on #EndSARS protesters at the Federal Capital Territory (FCT), Abuja. Instructively, the invasions of prisons with the attendant endangerment of public peace was not the straw that inflamed global angst: it was the reported callous shooting at unarmed protesters by the Nigerian military at Lekki toll gate in Lagos after persons suspected to be state agents turned off the lights that finally removed any restraints previously placed on global anger. With the calibre, passion and  postulations of commentators on the crisis, it is sufficiently clear that the #EndSARS protests is now a movement with global acceptance and popularity.

It is indeed galling that even with the descent into naked orgies of violence, there has been deafening silence from President Muhammadu Buhari. Against entreaties by well-meaning individuals and organisations within the country, and the ceaseless warnings by the global powers, including highly placed individuals such as former US Secretary of State, Hillary Clinton, Democrat presidential candidate Joe Biden, the Archbishop of Cantebury, Justin Welby, among others, the president, who usually waxes most lyrical while accusing his predecessors of sundry crimes, has failed to address the nation. Conscience and a sense of duty dictate that the president  should speak up, as encapsulated in the catchphrase of the #EndSARS protesters, Soro Soke. It is disturbing that the resolution of the Senate calling on him to address the nation, a resolution that he should not have needed at all, is still pending.

To be sure, it is naive for the Buhari administration to assume that reactions to decades of harassment, mutilations, assaults and killings by SARS operatives can be easily quelled by fanciful pronouncements by the government. A forward-looking administration would have continually engaged with the protesters and given daily updates,  in the manner of the Covid-19 updates by the Nigeria Centre for Disease Control (NCDC), on actions taken to reform the police, and continually appealed for calm while deploying security agents to trouble spots under strict rules of engagement. In case the administration has not grasped the point, the critical issue in the #EndSARS debacle is trust. To put it mildly, Nigerians do not trust the police. And, what is more, they do not trust the government, a reasonable position given the decades of government failure. Quite naturally, the protests are not only about police brutality: they are also a reaction to the miserable situation in the country, the appalling conditions in which the majority of Nigerians remain trapped in spite of the self-adulations of those in power. In any case, as the Ogun State governor, Dapo Abiodun, pointed out, the country’s youths, have been taken for granted for far too long, and must be attended to with dispatch.

We salute the #EndSARS protesters. Their efforts have been worthwhile. They have showed the nation how much can be achieved in unity. However, we appeal to the protesters to interface with the government with a view to resolving the extant issues. They will lose nothing by suspending the protests and giving the government opportunity to address their demands.  We also salute Nigerians all over the world for their patriotic actions in support of the movement. On its part, the Buhari administration must pursue strict implementation of the five-point demand by the protesters. The president must also shelve his customary opposition to the restructuring imperative. He has been missing in action and owes the little calm in the country to governors. He must act now.

Conversation with the Nigerian youth