Latest NewsCoronavirus
By Tribune Online On May 28, 2020 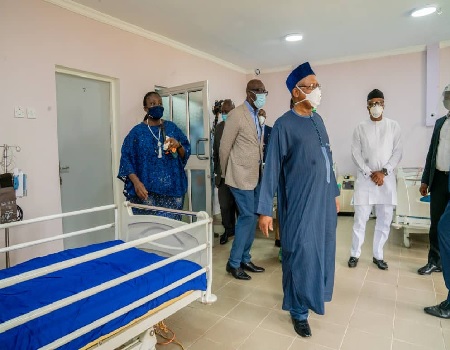 The Federal Government has applauded the Edo Government as the state inaugurates a 300-bed isolation centre and molecular laboratory in Benin.

Inaugurating the facilities, on Wednesday, the Minister of Health, Dr Osagie Ehanire, lauded Gov Godwin Obaseki for “the robust response of his administration to the coronavirus pandemic.”

The 300-bed isolation and treatment centre was built at the Stella Obasanjo Hospital in Benin, while the state’s third Polymerase Chain Reaction (PCR) molecular laboratory was established at the Edo State Specialist Hospital also in Benin.

The News Agency of Nigeria (NAN) reports that with the new isolation facility, Edo State now has over 600-bed capacity isolation centres spread across different health facilities in Benin, Auchi and Irrua.

At a ceremony to unveil the facility, Ehanire said: “I am here to access the level of preparedness of the Edo State Government in the fight against COVID-19.

ALSO READ: Why I sponsored bill for establishment of Federal College of Education in Ekiti ― Osun Reps

“This is the most significant health challenge of this generation as it has affected over 213 countries.

“We appealed to state governments to create bed spaces and testing centres to tackle the disease.

“This facility has 300-bed spaces in line with the Federal Government’s charge to states to ramp up effort to contain the pandemic.

“So far, Edo State has done well and even exceeded the target.

“I am privileged to inaugurate the PCR molecular laboratory at Edo State Specialist Hospital. Government and citizens should collaborate by following the preventive measures to protect Nigerians.”

Earlier, Obaseki expressed concern on the rising cases of COVID-19 in the state.

The governor said that so far, the state had screened over 260,000 people from whom 1,583 samples were collected for testing, with over 240 cases confirmed.

At the Stella Obasanjo Hospital, the Chief Medical Director, Dr Osagie Ebonwoyi, said that the hospital, was established in 2007 to serve as women and children hospital but that it was later upgraded in 2010.

He noted that the facility had now been re-modelled to serve as a centre to fight COVID-19.