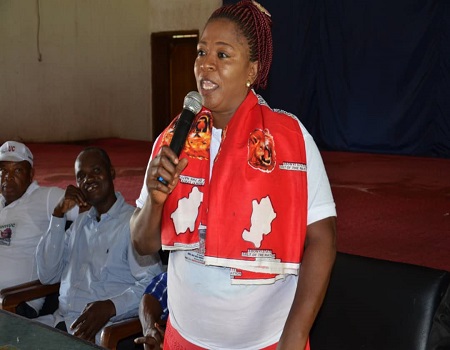 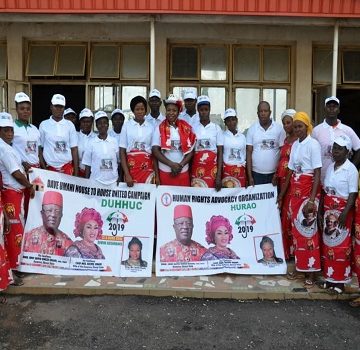 According to the team leader of the human rights organization, Mrs Jacinta Nworie, said they were motivated to stand by the Governor for the speed development and transformation he brought to the State within three years in office.

According to her, while briefing Journalists in Abakaliki said even though her organisation was a non-partisan, will continue to throw its weight behind good leaders as a means of guaranteeing continued rights of citizens to basic necessities of life.

Commending the Governor for his massive infrastructural development which cut across the 13 local government areas of the state, Mr’s Nworie also lauded the governor for accommodating all the ethnic tribes in the state through appointments into his administration and empowerment policies.

Nworie stressed: “We the members of Human Rights Advocacy Organization has come together to tell the world the numerous achievements of His Excellency the Governor of Ebonyi State.

“This is why Dave Umahi House to House Campaign Organization approached us to partner with us.

“We told them that we are human rights and we are not partisan but we support good governance.

“We have agreed to work together to bring back the man we have seen tremendous achievements within his three years in office.

“First of its kind, we are having many flyovers in the State.

“Many communities in the state that were hitherto inaccessible, today are replete with motorable roads

Through the department of religion and welfare, many indigent patients have been treated and discharged, courtesy of the Governor who have paid their medical bills. “Cancer patients, hepatitis patients, diabetes patients, to name but a few, are among those that have been treated free of charge by the state government.”

Finally the groups, with one voice, unanimously endorsed the Governor as their sole candidates for the second tenure in the 2019 gubernatorial election.