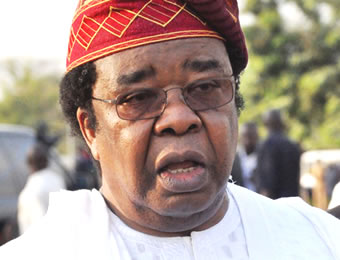 Against the backdrop of general restiveness in the country and the persistent calls for restructuring in the polity, renowned academic and diplomat, Professor Bolaji Akinyemi, has urged the Muhammadu Buhari-led Federal Government not to ignore the serious divisions and problems in the country, in the hope that the problems would go away or be addressed by another administration.

Akinyemi, who served as deputy chairman of the 2014 national conference, gave this charge in an exclusive interview with the Nigerian Tribune, noting that the recent exit of Britain from the European Union (EU) should provoke sober reflections on the ongoing debate about the Nigerian project.

He urged the Federal Government to consider implementing the report of the 2014 national conference organised by the immediate past administration, saying it thrashed out some of the problems the administration was currently confronting.

While distancing himself from the calls for a referendum on Nigeria’s continued existence by some sections of the country, Akinyemi urged the Federal Government not to brush aside the yearnings of Nigerians because of temporary power.

He said: “Our people have a saying that somebody who is warned about an oncoming war; if he is wise, the war would not catch him (Aro to ba gbon, ki i duro dogun). We have seen the unforseeable and unpredictable consequences of a recalcitrant attitude on the part of the British Prime Minister, who probably thought he would use threat of referendum to extract more concession from Europe.

“So, those managing our problems in Nigeria should not say okay they would leave this alone—it is not going to go anywhere—and that ‘in two years or three years, another administration would address these, I am not going to waste my time addressing them’.

“If you decide to ignore the problems, would the problems ignore you? And this is what kind of happen when you are reckless about something, or you are insensitive in addressing issues that you should address.

“People are saying something of this nature (Brexit) should happen here and Buhari should have a referendum about who wants to remain in Nigeria. I don’t buy into that. Yes, people are probably taking an extremely position.

“To me you can disagree with a person without being disagreeable. Your choice of words can show that you disagree without using crude words, demeaning words as if you are brushing them aside or as if they don’t even exist all because you know, you are in control of temporary power. Your power is not static, power is not static at all.”

He added that if Scotland were to break  away from the United Kingdom as a consequence of Brexit, then in fact, this would energise the secessionist tendencies not only in Nigeria, but also in many parts of the developing world

While expressing delight with the proposed dialogue between the Federal Government and the Niger Delta Avengers, he noted that the parameters for the dialogue must be clearly defined, urging both parties to learn from history and avoid what he called the Aburi syndrome.

In a related development, the co-secretary of the last national conference convened by administration of President Goodluck Jonathan in 2014, Professor Isiaq Oloyede, has joined the call for country’s political restructuring, saying “the present system is unfair to everybody.”

Speaking with journalists in Ilorin, the Kwara State capital, on Monday, Professor Oloyede, who is also the Secretary General of the Nigeria Supreme Council for Islamic Affairs (NSCIA), however said the restructuring might not be based on the report of the conference, which he largely faulted in some respects.

“You can see what happens now, almost all the states are under economic pressure which ought not to be if we are running a true federal system; because it would be possible for each of the components to have created the wherewithal to do its own things in its own way.

“I will go for a proper restructuring of the federation with adequate representation of the people for a genuine discussion.

“You can see what is happening in the United States (US); a colleague of mine told of a state in America that once you are a cleric, you can aspire to become the governor of that state. As unfair as that is, that is the policy of that state within the US and the other 49 states would so know that you can aspire to become anything once you are qualified. What I am saying is that the system we are running is unfair to everybody.”

Professor Oloyede, a former vice chancellor of the University of Ilorin, condemned the intention of the conveners of the last national conference, saying it was not based on national interest and described the conference as “unnecessary.”

“Coming to the issue of the National Conference convened by the then President Goodluck Jonathan, it was absolutely unnecessary in the first instance. The way I look at the conference was that the then government wanted some people for a long time in Abuja to plan elections. How do we do that? They had to look for an excuse for bringing us down. Those of us who participated knew that those people who were the core of the conference were meeting every night. Definitely they were not meeting about the conference. The conference was not meant for anything but a forum for some people to meet on some other issues.

“But that does not mean that having come together there were no decisions taken, but you cannot place something on nothing. The composition of the conference itself does not represent the structure of Nigeria. There was no adequate representation of the people. if you take the number of people from the South-South and look at the proportion of their population to the number and the percentage of conferences attendees that would tell you that abintio it was meant to be a joke. For me I lose no sleep for the decision of the federal government that it is meant for the archives. I thought it would even be for the dustbin. That is the way I look at it. I believe that it was meant to be a joke and it ended up being a joke.

“So if the then president had wanted to implement, he would have started implementing it. Unfortunately, many of us from the South-Western Nigeria thought that they could ride on that agenda either to be able to access resources from the man or for them to achieve their own particular end. At the of the day, it was clear to everybody that people were just deceiving one another”, he said.