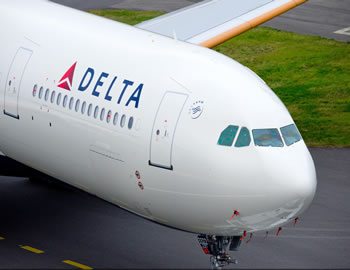 ALMOST 24 hours after the incident involving the Delta Airlines aircraft which had its left side engine catch fire and subsequently parked up mid-air after take off from the Murtala Muhammed International Airport, the airline has failed to notify the Nigeria’s regulatory bodies on the incident.

The Commissioner of Accident Investigation Bureau (AIB), the agency meant to investigate accidents and incidents in the country, Mr Akin Okateru declared this at a press briefing yesterday evening.

According to the AIB Commissioner: “Yesterday night, Delta Airline Flight DL 55, an A330-200 departed Lagos at 21.51UTC with 219 passengers on board. Registration number of the aircraft is n858NW.Aircraft reported fire warning on-board left the engine and made an emergency landing at the time and that was at 21.19UTC. Passengers have been evacuated and fire put under control. Some passengers sustained minor injuries during the evacuation. This is all we have at the moment.

“As you are aware, AIB is an agency of government that investigates accidents and serious incidents. The enabling Act of 2006 and all we do here is in accordance with our regulation which takes a cue from the ICAO Annex 13. Everything we do here is in accordance with ICAO Annex 13. Unfortunately, up until 3 pm, this afternoon, Delta as an airline has refused to notify AIB in accordance with the law of our country. But they notified the United States National Transport Safety Board (NTSB) but they refused as of 3 pm today, there is still no notification from Delta as to this serious incident.

” ICAO law governs all the activities of air transport business. They know that we must be notified. Our websites are there; they can download the form, they can download the App. We wrote to Delta October last year notifying them that we have AIB App which they just need to download on their phone and send us notification. It is a very simple process. Nothing can be simpler than this but unfortunately, as of 3 pm today, they refused to notify the authorized agency by law of the land to investigate this kind of serious incident.
We have a responsibility to report this kind of serious incident to ICAO. We cannot fulfil our own obligation because this incident occurrence has not been reported to us officially by the operator. I am in contact with my counterpart in the US, Mr Dennis Jones, MD of NTSB. He agreed with me and he will make sure that Delta do the needful. So, we are expecting this.”

Speaking earlier, the Director General of the Nigerian Civil Aviation Authority (NCAA), Captain Muhtar Usman has described the incident as a serious one

The NCAA boss who said the Accident Investigation Bureau had commenced an investigation into the incident in line with the International Civil Aviation Organization (ICAO), also confirmed that the affected engine caught fire which made the pilot to declare ‘mayday’, which is an exclamation often made by the pilot of any aircraft in distress.

“Well, again, it was reportedly on fire, the captain requested or declared what we call MayDay, which was an emergency that he wanted to come back citing one of the engines was on fire, requesting for emergency services and all the agencies that were required to be there were there for that aircraft to ensure that everything went smoothly, the aircraft landed safely, there was precautionary evacuation of passengers, however, details of the cause and recommendation will come from the AIB.”

Speaking on what could have led to the fire, Usman said: “Well, basically most convention engines are always on fire, we only call fire when it goes out of control it is when we can no longer control it and provisions are made so that when you have such indications and you can extinguish the fire because we have firefighting facilities on board which is either through a button or switch to be able to discharge or extinguish the fire, all the while the pilot maneuvers the engine to safe landing.