Calabar tank farm fire: The positives of a tragedy

Opinions
By Kehinde Olaosebikan On Aug 16, 2017 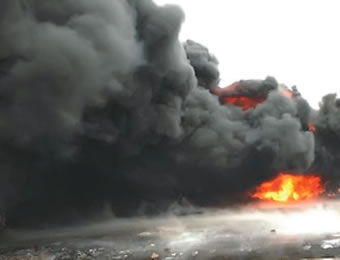 Tragedy, like war is what nobody prays for. Discussing or mere talking about it is even tough for some as they feel awful or scared at the mention of it. However, the two are realities of life. They happen whether one likes it or not.  Life, itself is even described as a war. It is a thing we live with, day in day out. Human beings encounter tragedies or wars in different ways. For some, it is nagging domestic issues while in extreme cases; humans are faced with loss of precious ones and invaluable materials. Nobody prepares for it and none could predict its consequences. No matter how careful, one’s level of safety and security consciousness notwithstanding, they just happen, leaving behind tales of woes, sadness and catastrophes.

For LINC Tank Farm Limited, Calabar, it was a tragedy too many on July 16 when its farm went up in flames as a result of an oil spillage. The inferno which occurred at about 3.40 am claimed lives including those of a key worker of the farm, two in the opposite company, DOZZY Oil and Gas Tank Farm and some security personnel. The neighboring community also shared from the tragedy as the inferno which erupted while people were scoping petrol (PMS) killed a number of the villagers. In addition, property worth million of Naira were also destroyed in LINC, DOZZY and other adjacent organizations. The environment was not spared too, as it suffered debilitating damages; the flora and fauna seriously hit. Three weeks after this sad incident, the whole of  Calabar Free Trade Zone is still in gloom as noticed when the House of Representatives Committee on Petroleum (downstream) paid an on the spot assessment to the farms last Thursday. From the entrance of the CFTZ to the LINC Farm, the adverse effects of the disaster were still palpable.

Right inside the farm, one can only pity and empathize with the organization, as its Chief Executive Officer, Chief Patrick Ifeanyi Oramah conducted the team round the erstwhile functional and robust depot now characterized with charred structures, burnt facilities and dim looking workers. It was a pitiable sight that left most of the legislators feeling very concerned.   Chief Oramah explained to the Law makers that he was traveling out of the country when he got the most destabilizing call in his life that an oil spillage in their tank farm ignited and resulted in loss of lives.

“The tragedy” Chief Oramah  said “ensued consequence of spillage of petroleum (PMS) into the drains while it was being pumped from Dozzy Jetty, through pumps run via our farm, to Dozzy Depot, another tank farm located opposite us. The spilled petroleum later got ignited while people were scooping it outside our premises” He told the lawmakers that his company did not have any product in any of its tanks as at the time of the incident as the tanks had remained empty since January, the last time they sold petroleum products at the depot. Oramah however became emotional as he revealed to the legislators that his company was expecting delivery of products to the tank farm the week, the unfortunate incident occurred declaring that the incident was a terrible calamity for them and that they were deeply saddened. “LINC Nigeria Limited is terribly saddened over this disaster, particularly, the loss of human lives. We intensely commiserate with the families of the bereaved and the entire Esuk Utan Community. Our heartfelt sympathies go to DOZZY Tank Farm Limited and all our neighbors over these monumental losses” Chief Oramah said in an emotion laden voice.

He however disclosed to the visiting legislators that the management of Calabar Export Free Zone handled the tragedy with deft and utmost sense of responsibility as he also praised the Fire Service, Nigeria Police and other security and safety agencies for their promptness and diligence in combating the fire. The instantaneous display of concern and conscientiousness by the Nigerian National Petroleum Company (NNPC) and its regulatory agency, Department of Petroleum Resources (DPR) to the disaster was also commended before the legislators. Chief Oramah explained that that LINC has always been in total compliance with safety and security measures in and around its premises and in all its operations. He however added that Investigations were on- going and that his company was cooperating fully with the various agencies.    Done with the briefings, the Chairman of the committee on Petroleum (downstream), Honorable Joseph Akinlaja Iranola condoled the management of LINC, DOZZY, and the entire community over the unfortunate incident. Honorable Akinlaja said the committee was impressed with the effective management of the disaster by the Export Free Zone, the security and safety agencies of Cross River State and the Federal Government. He said with such exhibition of effectiveness in combating this tragedy, Nigeria was genuinely making progress in disaster management.

The chairman assured that the National Assembly would continue to see to the protection and safety of lives and property of citizens in its legislative functions.  As tragic as the incident was, it however provided  some positives as narrated by the Chief Executive Officer of LINC: the display of capacity, competence and care by all the concerned authorities and agencies of government, that our institutions are truly living up to their responsibilities in the spirit of Change. This comes with the hope that the consequences of this ugly incident would not matter to LINC, all the organizations and individuals affected in no time.

Of Nigeria and social media

Tech-U and the university ideal