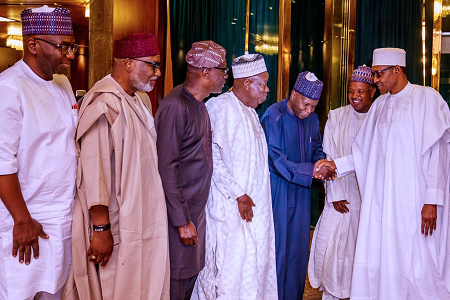 President Muhammadu Buhari and governors of the All Progressive Congress (APC) will meet Sunday to decide a definite date for the conduct of the party’s national convention.

The party is hoping that a date in February is still feasible as it has come under pressure from the president to clean up its act or cede power to the main opposition party.

Chairman of the Northern Governors Forum and governor of Plateau State, Simon Lalong, who met with the president at the presidential villa, Abuja, Friday told correspondents that the Sunday meeting will centre on the proposed date for the convention.

He said Buhari’s admonition to the party that it risks losing power to the Peoples Democratic Party (PDP) is a signal for the party to have a seamless convention so that it will not disintegrate.

He said the governors have now given the president the assurance that the convention will hold in February.

According to him, the president’s warning is for the party to redouble its effort and do the right thing.

Lalong observed that as a political party, the APC is made up of different interests saying, “what matters is that at the end of the day, we will elect our representatives.”

In spite of the huge investment in the water sector by the government and international organisations, water scarcity has grown to become a perennial nightmare for residents of Abeokuta, the Ogun State capital. This report x-rays the lives and experiences of residents in getting clean, potable and affordable water amidst the surge of COVID-19 cases in the state…APC govs decide convention. APC govs decide convention

2023 Presidency: I am offering myself to save Nigeria from drifting, says Anyim