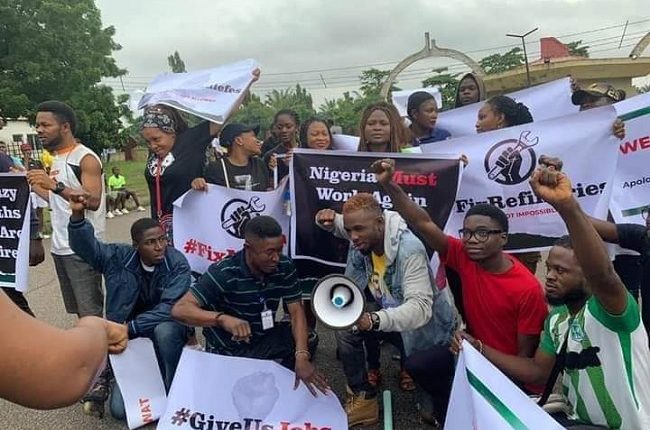 Barely a week, youths across the country began endsars protest, hundreds of youths in Benue stormed major streets in the capital city on Saturday for endsars protest.

The youths in their numbers carried placards with various inscriptions like; “End Police brutality”, “The Service Chiefs must go”, “Restructure Nigeria” and “Give us jobs”.

Other inscriptions also ead, “We deserve better”, “Secure Nigeria” and “Fix Nigeria” among others.

The youths who took off from IBB Square, Makurdi marched round some major streets in the capital city of Makurdi.

The procession took the youths to Tito gate and passed through Railway market before headed to Police headquarters, where they had stop over chanting solidarity songs for some minutes,, thus disrupted traffic flow.

Some people who earlier closed down there shops for fear of possible breakdown of law and order later flung them open when they discovered that the protest was peaceful and devoid rancour.

The protesters also marched through high level before they dispersed.

The party also said that immediately the Caretaker/Extraordinary Convention Planning Committee was put in place after the NWC’s dissolution, the crises that had characterised its affairs were laid to rest…Benue youths join protest

The Emir of Zazzau, in Kaduna State, Alhaji Shehu Idris has died in his palace at the age of 84….Benue youths join protest

His son, Aminu Shehu Idris, confirmed in an interview with the Tribune Online that his late father who was appointed on 15th February, 1975 and spent 45 years in the throne died on Sunday after a protracted illness…Benue youths join protest

My defection rumor is false, I am in PDP ―Gov Umahi