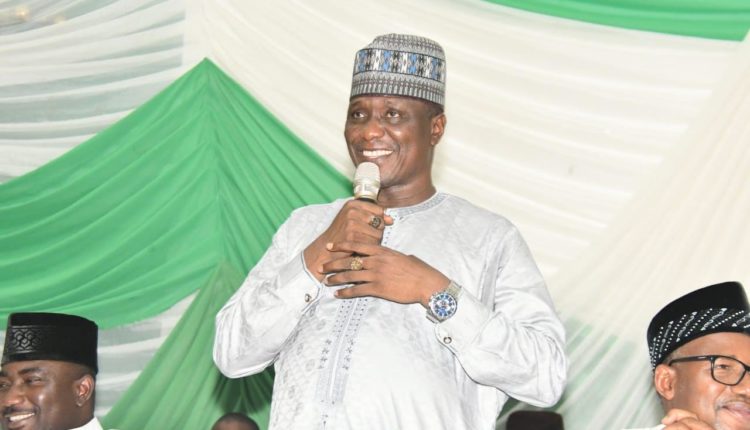 After weeks of speculations, denials and keeping mum, Speaker of the Bauchi State House of Assembly, Abubakar Y. Sulaiman, has finally dumped the All Progressives Congress (APC) under which banner he was elected in 2019 and joined the ruling Peoples Democratic Party (PDP) in the state.

Speculations have been rife that Abubakar Y Sulaiman who was supported by members of the PDP in the House emerged Speaker in a controversial manner which led to serious rancour for months before tension was doused.

The Speaker who is the Chairman, Conference of Speakers of State Legislatures of Nigeria made the formal announcement of his defection on Saturday during the Ramadan fast breaking (Iftar) hosted by the State Governor, Sen Bala Mohammed Abdulkadir at the Banquet Hall of the Government House.

He said that, “I want to use this opportunity today to officially announce to His Excellency, the Executive Governor of Bauchi State, Bala Mohammed and other stakeholders in the People’s Democratic Party (PDP) of my formal defection to the State ruling party . One of my reasons to return to the PDP is in recognition of the exemplary leadership style of our Governor and his commitment to transforming the state.”

The speaker appreciated Governor Bala Mohammed for the harmonious working relationship with the state assembly which he observed, has paved away for the successes recorded by his administration in the area of delivery of dividends of democracy to the citizens of the state.

The Ramadan fast breaking was organized for and attended by PDP stakeholders from Ningi, Toro, Warji and Dass local government areas of the state in continuation of such by the Governor since the commencement of the Ramadan fasting.

Abubakar Sulaiman while speaking, stressed that his decision to dump the APC for the PDP was informed by the recognition of the exemplary leadership style of the Governor, Sen Bala Mohammed Abdulkadir as well his commitment to transform the state without neglecting any section.

The Speaker further commended the Governor for his ability to ensure harmonious working relationship with the State Assembly despite party differences since 2019 when the 9th Assembly was inaugurated.

He stressed that relationship between the two allowed formulation and implementation of policies and programmes aimed at ensuring the development of the State.

Abubakar Sulaiman then promised to continue to work harmoniously with the Governor in ensuring that the mandate of his election was achieved just as he assured that his coming into the PDP fold will add value to the party in Ningi/Warji Federal Constituency in particular and Bauchi State in general.

While responding, an elated Governor Bala Mohammed welcome the Speaker into the PDP fold describing the development as an honour done to him by the Speaker who he described as a team player in spite of political differences.

Bala Mohammed said that the step just taken by the Speaker had been long expected considering the body language in recent times, stressing that it is a home coming for the Speaker having supported all the programs of the PDP in the past

The Governor further acknowledged the good working relationship between his administration and the state assembly and called for continued working synergy for the speedy development and progress of the state.

According to him, “We are grateful to Almighty Allah for bringing us to this Holy month of Ramadan with good health and peace in Bauchi state and we are grateful to you as our stakeholders for your contribution to my emergence as Governor of Bauchi State in the last general elections”.

Bala Mohammed added that, “When we took over , Bauchi State was  in a stage of total collapse in critical sectors of the economy and Alhamdulillah our efforts in Health, education are yielding positive results. I urge our stakeholders for your continued support for the success of the PDP led administration in the state.”

The Governor then directed for the immediate establishment of a State owned College of Education in Dass local government area, promising that he will continue to work towards fulfilling his campaign promises for greater Bauchi state.

The Governor then assured the Speaker and all others coming into the PDP of fair treatment stressing that nobody will be treated as a stranger advising them however to follow the due process as contained in rules and regulations of the party.

As resignation looms, DG NIMASA begins consultations over governorship ambition at his emirate