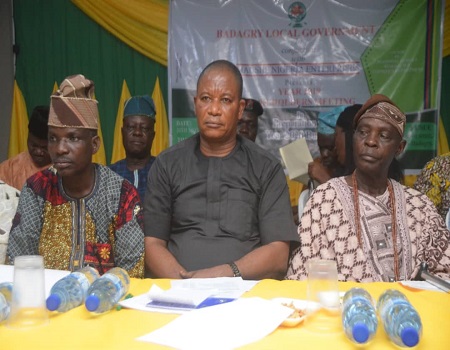 Mr Olusegun Onilude, Chairman, Badagry Local Government Area of Lagos State, has expressed commitment toward the equitable distribution of developmental projects across the 10 wards in the council.

Onilude gave the assurance at a stakeholders’ meeting on the council’s budget in Badagry.

The chairman said that his administration had touched the lives of many people in the 10 wards with one project or the other.

He said that most of the long list of requests and demands from various communities were addressed in the 2019 Budget.

“Other projects are the distribution of free GCE and JAMB forms to brilliant and indigent students in the council including tutorial classes for the lucky candidates.

“Distribution of marker boards to all the 23 primary schools and the development of Ikoga Zebbe Modern Market.

“Development of Badagry Round About, International Garage and Redevelopment of Simeon Kiki Whenu Shopping Complex.

“Empowerment programmes for widows, elderly and vulnerable and construction of the first phase of drainage channels on Top/Salu Road,’’ he said.

Onilude said that the business of the gathering was to discuss the needs and desires of the communities in the council area.

According to him, our major points of discussion would form the basis for inputs into the 2020 Budget.

“I wish to draw our mind to the economic dictum of unlimited wants and scarce resources.

“We should be ready to play our parts through prompt payment of all the council levies, rates and tolls.

“Paying all that is due to the government and indeed encouraging people around us to pay is a social responsibility,’’ he said.

Also, Chief Gbewa Onusekan, the Jegen of Badagry Kingdom, urged the chairman to include the Chieftaincy Office for the Council of Obas in the 2020 budgetary proposal.

Onusekan also urged the chairman to give the Council of Obas a new bus for their transportation.

In his remarks, Mr Hunwi Tande, the Chairman of Ward B, urged the council chairman to build befitting palaces for Oba of Ajido, Ajara Topa, Ajara-Agamathen and Ajara-Vetho.

Mr Akwemaho Daniel, from Ward B, Posukoh, said that flood had taken over their road due to lack of drainage channels.

He urged the chairman to include the construction of drainage channels in the 2020 budget.

Nautin said that this would serve as a source of income generation for the council in the nearest future.

Lawmaker calls for establishment of Federal Polytechnic in Badagry