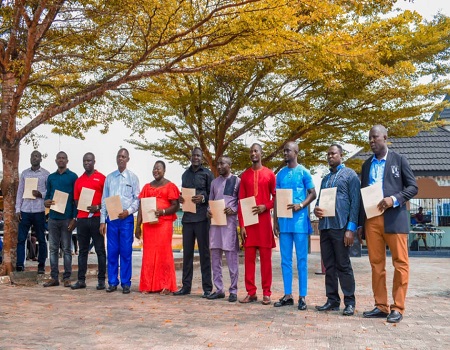 It will be recalled that Eris-Odu was elected winner, having obtained 10 to four votes over his counterpart during an internal voting process by the elders of the community.

The swearing-in ritual, which was conducted on Tuesday by Barr. Eric Omare the Principal Counsel, E.K Omare, Legal Practitioner & Company, had the new executive taking their oath of office and pledging allegiance to serve the community amid convivial celebrations.

The former chairman of the community, Chief Godwin Olufemi, while addressing the new executive, encouraged them to be of service to the community and ensure that they perform better than his administration did in bringing more development to the community.

Speaking on behalf of the new executive, the chairman, Mr Eris-Odu, acknowledged that the past chairman and his executive had done very well for the community during their tenure; requesting the government to ensure the community is well catered for.

“I am happy for what God has done from the beginning of the whole event until today.

“As a new community chairman, we the members of the newly sworn-in executive will sit together and strategise on a formula that will ensure the community is well taken care of.

“Where the past executive developed the community, we will continue from there and take it to the next level.

“We will improve in the educational sector of the community so that things will be easy for our people.

“My executive and I will put the head together to do remarkable things in the community so that all the people will be happy.

“Benikrukru is an oil-producing community and so, I and my executive would be in synergy with the oil companies operating in our environment and the government to ensure more development,” he pledged.

The President, Gbaramatu Youth Council, Comrade Christopher Wuruyei, disclosed that the Godwin Olufemi-led executive was one that understood the mechanism of community politics and development as they worked to ensure that Benikrukru had steady progress.

He pointed out that the Eris-Odu-led executive is a continuation of that development process that would ensure a steady progression of the community.

The outgoing PRO of Benikrukru community, Comrade Joel Tonjoh added that the transition process of the community leadership was a good one, as it was the community’s interest superseding the interest of few. He said the will of the people was to get someone with a passion to develop and attract government presence to the community and Solomon Odu is that man.