Ayo Mogaji of “Feyikogbon” down with kidney failure, memory loss 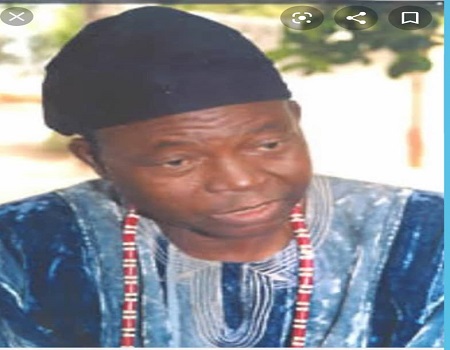 Share
Popular actor, Chief Sunday Akinola (aka Ayo Mogaji of Feyikigbon) is in dire need of N30million to travel abroad to attend to kidney failure and hypertension which he has been battling with in the past five years.
He is also suffering from memory loss, apparently as a result of his ailments, as he tearfully said could not remember anything again, even as he was begging for assistance.
The 77-year-old thespian hit the limelight with his popular weekly sitcom, the Feyikogbon series, which regularly featured for over on NTA Channel 7, Lagos for over 13 years from the 1980s to early 1990s.
However, fate and fortune did not smile on him as the man, in an interview conducted in 2014, claimed that the popular play only made him popular without putting money in his pocket.
Born on 19 September 1942, the Ipaja Idogo, Yewa, Ogun State-born actor has also been battling with hypertension, even as he lamented that financial help was not forthcoming to attend to his medical problems.
Sunday Tribune gathered during a visit to his house at Ipaja, in Alimoso Local Government Area of Lagos State, on Wednesday, a frail Chief Akinola said he was finding it difficult to raise the N30 million to travel abroad for treatment, as advised by his doctors.

He said he sold almost everything he had, except the house which he built in 1985, to take care of his health, after he was diagnosed with kidney failure, some few years ago.
He said he would need the help of good-spirited Nigerians to be able to raise the money in order to be flown abroad for proper medical treatment, even as he said, “How I wish I can still churn out more stories.”
In an interview in 2014 after he became hypertensive, he said his deteriorating health had stopped him from featuring in major theatre projects, even as he expresses the wish to still play an active role in the Yoruba movie industry.
“I am old but still active and alive. I have been sick for over five years, battling with hypertension and you know a hypertensive patient needs to relax and do away with stress,” he had said.
Akinola was also a musician and former soldier who was drafted to the Army shortly before the Nigerian Civil War and fought alongside the like of the late Fuji music icon, Chief Sikiru Ayinde Balogun (popularly called Barrister).
He eventually embraced and horned his skill of writing plays between1982 and 1983 and produced several episodes of the Feyikogbon series and sired many other popular artists, including Ajobiewe, Yetunde Wunmi, Disu and Busari, among others.
In spite of the wide acceptance of his Feyikogbon sitcom, Ayo Mogaji is in a pitiable condition, living at the mercy of good Samaritans and the pension from the Nigerian Army.
Even his small house does not represent a picture of a theatre icon that has entertained and contributed to the moral uplift of the society through his Feyikogbon episodes on the national television.