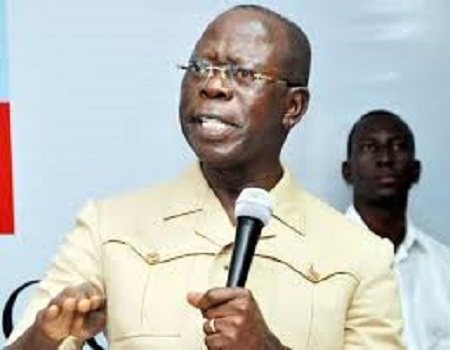 National Chairman of the ruling All Progressive Congress (APC), Comrade Adams Oshiomhole, has denied that he was pressured to call Friday’s meeting of the party’s National Executive Committee (NEC) meeting in Abuja.

Speaking to State House correspondents at the end of the APC national caucus meeting attended by President Muhammadu Buhari on Thursday night, he said the meeting had long been scheduled.

The party boss has come under pressure from some party members in recent times culminating in a demonstration at the party national secretariat on Thursday calling for his resignation.

Asked whether he was under pressure to convene the meeting, he said: “There is no pressure. NEC meeting was scheduled like two months ago. We are just waiting for the day to come. It was fixed two months ago. And it is taking place tomorrow (today). Are you not aware of that? “

When reminded of the remarks made by prominent party members on the issue, Oshiomhole stated: “You are talking of what Mr Salihu Lukman said. That is his opinion. Even before he said that this meeting has been fixed. It is normal to hold a meeting.

“We have  NEC meeting to look at our financial statements for previous year, budget for next year, issues that arose during and after the elections, and current outcomes of various cases that went to court; the one we won and the one we lost; going forward; issues in some states where we have disagreements and how to resolve the disagreements. I think that is it. And it (caucus) went very well. And you can see the president sat all through the meeting.”

On the outcome of the national caucus meeting, Oshiomhole remarked: “You know it’s a meeting of National Caucus. Basically, it is just to review the performance in the last elections, current issues, next year’s budget, and disciplinary issues. You know caucus is like an elders’ council to speak on a lot of things that we will discuss at NEC tomorrow (today). “

Ayo Mogaji of “Feyikogbon” down with kidney failure, memory loss

I will continue with Oshiomhole legacy, says Ize-Iyamu