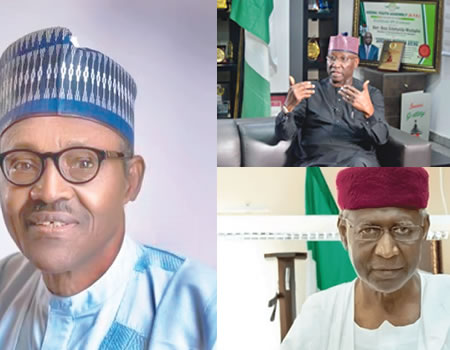 LEON USIGBE writes on the presence of COVID-19 in the presidential villa and its handling so far.

WELL before the outbreak of the coronavirus (COVID-19) pandemic in China, the presidential villa, Abuja was very sensitive to the threat of infectious diseases. There, the use of sanitizers had been a way of life. This is perhaps to prevent the numerous visitors who have access to President Muhammadu Buhari and would likely shake his hands, from inadvertently passing on any virus to him. So, nobody had gone into the council chambers or the president’s office without having his/her hands sanitized at the entrance. The president’s handlers had been conscious of the damage an infection transmitted from outside could do to his fragile health, which he has so far been able to manage and appears nursed to full recovery after those lengthy medical trips to the United Kingdom (UK) in the past.

The proof of this, in recent times, has been his staying power in presiding over numerous lengthy meetings without appearing to be weary. Giving access to COVID-19 to threaten this condition was a major no-no. Therefore, at the news of the outbreak, the villa authorities moved to further fortify the premises by setting up various points to check the health status of staff and visitors alike. Health workers were deployed at those points armed with containers of sanitizers, face masks and thermometers to check the temperatures of those coming in. Where some were found to have higher than normal temperatures, they were denied access to the villa and advised to go for treatment. Those with cough, no matter how insignificant it may sound, were given face masks to wear as a precaution. However, these measures were insufficient to block the villa from being exposed to the dreaded virus.

The First Lady, Mrs. Aisha Buhari’s action to shut her office for two weeks with her London returnee daughter in self-isolation as well as the resumption for work of a top aide who had also just arrived from the UK, signaled that the seat of power was not immune to the virus. Mrs. Buhari could not vouch for the aide and her presence in the office appeared to be the tonic she needed to order its temporary closure. Hear her: “Earlier today my daughter returned from the UK being among the high Burden listed countries of COVID-19. Based on the advice of the Hon. Minister of Health, Presidential Taskforce on COVID-19 and that of NCDC, she is on self-isolation, not because she displayed any symptoms of the COVID-19. Please, I urge all parents to do the same if possible as prevention is better than cure. Similarly, I have shut down my office for two weeks with immediate effect while essential staff can work from home as a result of some staff who recently returned from the UK.”

The situation in the First Lady’s Wing of the presidential villa was a “let’s wait and see” moment because some skeptics, rather than see it as transparency, dismissed it as “the usual drama.” They were wrong because days later, the alarm bells tolled in the president’s office. His chief of staff/confidant was revealed to have tested positive for COVID-19. There was panic in the seat of power. The question that agitated the minds of not just the people in the villa, but the entire nation was, “What’s the implication of a Kyari positive COVID-19 test on the president with whom he had not stopped relating at very close quarters?” It was not just that. State governors, ministers, members of the diplomatic community, senior government officials and staff that he interacted closely with during the period, all had fears that Kyari had exposed them to the virus and their health may have been jeopardized by that. President Buhari was worried enough to have quickly taken the coronavirus test to determine his status. It was said to have come out negative even though nothing concerning it had been officially acknowledged. The government had activated its legendary secrecy in dealing with some matters that should be of public interest.

Even the Presidential Task Force on the control of COVID-19 headed by the Secretary to Government of the Federation (SGF), Mr. Boss Mustapha, which had given a daily update on the virus in the country, suddenly went mute. Observers thought that despite the growing speculation, they would not want to be queried on the COVID-19 status of both President Buhari and Kyari, which may have become topics too hot for them to handle. Even Buhari’s spokesman, Femi Adesina, was coy when confronted with the issue after it was speculated that Buhari had tested negative. When asked whether indeed the president was tested for COVID-19, Adesina responded: “What did you hear about the result?” When told that the rumor was “negative,” he added: “Good. So, that calls for rejoicing with him. Anybody that does the test and tests negative, we will rejoice with that person.” That was taken as a subtle confirmation.

Some cynics have expressed worries that not only has the president not found it expedient to talk directly to the citizens about the threat of COVID-19 in the country and efforts to deal with it, but there is also now a bit of opaqueness in the way his affair and those of other administration officials are being handled as far as the virus is concerned, and suggest that more openness is required at this time of national emergency.

We are working on palliatives, Makinde tells Oyo people

I want to go back to my parents, says child-wife accused of stabbing husband to…