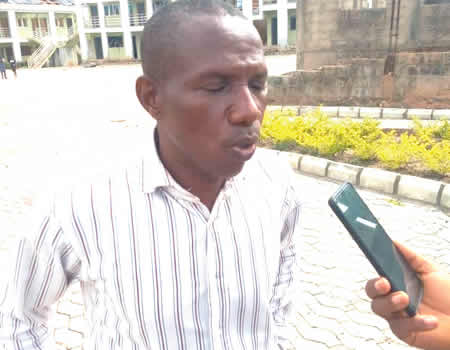 Principal of Aina Awaw International School, Akure, Jayeola Roland, speaks to HAKEEM GBADAMOSI on the destruction of the school buildings occasioned by an explosion that occurred on Saturday.

Can you explain how this happened?

We thank God that no life was lost, considering the impact of the blast. I received a call around 1:20 a.m. from the security man who said something had happened in the school. He said that all the buildings had collapsed, but that he couldn’t explain what led to the collapse. He couldn’t express himself very well, because he was shivering; he was obviously devastated.

I had to rush down here and getting here, I learnt that a vehicle was conveying some explosives and broke down opposite the school. Nobody could ascertain where the vehicle was coming from. The security explained that he saw some men who parked their vehicle and that they opened the bonnet of the vehicle trying to fix the truck.

He said he waved his torch light at them but that the three men who were fixing the vehicle started to run towards some policemen who were on the highway. They told them about the situation, while they all ran to safety. After that, there was an explosion that led to all that we are seeing now.

How many buildings were destroyed in the school?

Nearly all the buildings in the school were destroyed. About seven structures were affected.

What is the population of the school?

We have about 42 students, but they have all vacated the premises because of the issue of coronavirus. Thank God for the government’s directive that all schools should close down. It was only the security men that were around when the incident happened.

How many of them were affected by the blast?

Three of them have slight injuries and they have been rushed to the hospital and they are responding to treatment.

Can you quantify the extent of damage to the school?

I don’t think I can quantify the extent of damage. It will be very close to N1 billion. The least of the structure is more than N50 million and we have other things inside the buildings. All the classrooms are equipped with interactive boards, adjustable chairs, air conditioners and others facilities.

What do you want the government to do for the school?

I want to appeal to both the state and federal governments that whatever they think they can do to help this school and other places destroyed by the blast will be appreciated. They should come to our aid so that the school will not collapse completely.

We need assistance from government so that the mission of the owner of the school will not be defeated. The school was established to build sons and daughters of these communities and the latest development is so unfortunate.

ELECTION MILITARISATION: When the US gave its verdict on 2019 elections