Top News
By Olayinka Olukoya and Dare Adekanmbi On Jul 6, 2017 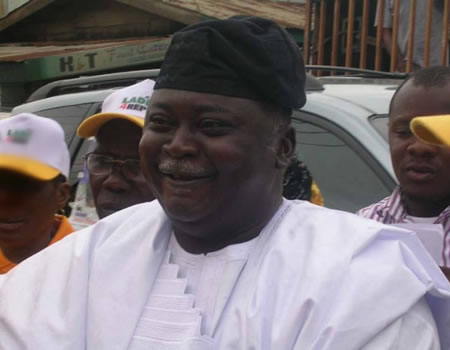 A member of the House of Representatives and chairman, House Committee on Rural Development, Honourable Oladipupo Adebutu, on Wednesday, narrowly escaped being killed as gun-bearing thugs attacked and opened fire on his convoy at Oke Ide, Otta, Ogun State.

One of his supporters identified as Mojeed was, however, not so lucky as he was shot dead by the hoodlums suspected to be loyalists of political opponents.

Tribune Online gathered that Adebutu, who is governorship aspirant on the platform of the Peoples Democratic Party (PDP) in the state, was returning from Ogun West senatorial district meeting in Otta when the incident occurred.

He had stopped over at Otta from Ayeitoro, venue of the meeting, to visit some party members who were arrested by the police on Tuesday based on a complaint by a rival faction of the party led by one Prince Segun Seriki.

An eyewitness told Tribune Online that scarcely had Adebutu parted with the party members whose release he had earlier secured when the assailants struck, sending the people of the area to scurry to safety.

It was gathered that a crisis had erupted on Tuesday when Seriki, who hails from Ijebu Igbo in Ogun East, declared his governorship ambition in Ogun West district, a decision that was allegedly opposed by supporters of another governorship aspirant, Gboyega Isiaka, resulting in a pandemonium that led to the arrest and the arraignment that followed.

But Seriki, while reacting in a telephone interview, said he had no hand in the tragedy as he was not in Ota when the incident happened.

“I was not in Ota anyway, but I can understand their desperation to cover up the killing of somebody. People came to attack me last week. I am a law-abiding Nigerian. I have reported to the law enforcement agency. They have arrested those that attacked me and charged them to court.

“I had no contact with unruly people. My position is to enhance the enforcement of law and order. Some people believe in circumventing the law for whatever anticipated political game. It is their luck.

“There was no way I could come into the picture. I don’t resort to self-help and I don’t deal with thugs,” he said.

When contacted for confirmation on telephone, the state Police Public Relations Officer, Abimbola Oyeyemi, said he would get back to Tribune Online.