•To churn out 30 First Class graduates 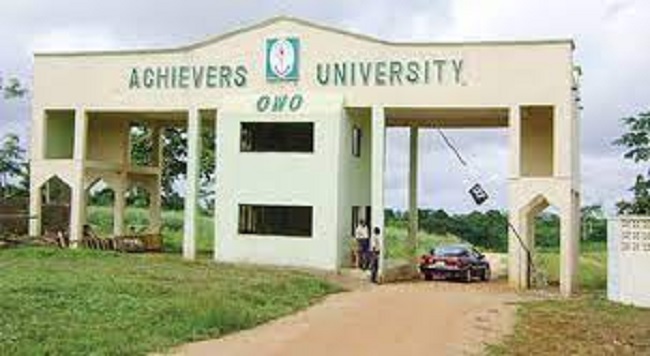 The Vice Chancellor of Achievers University (AU) Owo, Ondo State, Prof. Samuel Aje, on Monday said all is now set for the commencement and running of the Aviation programme in the school, following the approval of the programmes by the National Universities Commission (NUC)

Prof. Aje who disclosed this during a press conference to herald the 12th convocation ceremony and 15th anniversary of the school, said the school would also commence the running of programmes in the College of Medicine, Pharmacy and Education.

According to him, the College of Aeronautic and Aviation Technology would be complemented with an in-built 1.5-kilometre runway to be located in Owo, headquarters of Owo council area of the state, and said the land for the project has been acquired.

He disclosed that there is no University in the country and West West Africa offering the programme and assured that “Achievers University wants to make it the best.

“As of now, there is no university that offers that kind of programme in Nigeria. It requires a lot of work and we are already talking with our partners. South Africa has something of such but we want ours to be the best in Africa.

Speaking on the convocation ceremony, he disclosed that about 520 graduates would be churned out during the ceremony, with 30 of the graduating students coming out with the first-class upper.

Aje said the University will be covering the degree of Honoris Cause to three Nigerians who have distinguished themselves in various fields of human endeavour.

He listed the personalities to include, the Olowo of Owo, Oba Ajibaderinwa Gbadegesin Ogunoye, former President of the Court of Appeal, Justice Ayo Isa Salami and Minister of Communication and Digital Economy, Prof. Isa Ali Pantami

The VC said the convocation lecture would be delivered by Prof. Pantami, with the topic, Digital Innovation and Entrepreneurship as Panacea to Unemployment on Friday 9th December on the school premises.

The Vice-Chancellor also revealed that 893 indigents but brilliant students of the institution have benefitted from a scholarship scheme instituted by the school between
2020/2021 and 2022/2023 academic sessions.

He said all the students enjoyed free tuition in ten lucrative and professional courses which include, Accounting, Business Administration, Economics Political Science, Sociology, Biochemistry, International Relations, Plant Science and Geology among others.

According to him, the scheme was specially designed for indigent students as part of the corporate social responsibility of the institution to its immediate environment, saying the impact on society is more important than the financial gains.

Don’t have enough time for sleep, rethink your schedule!