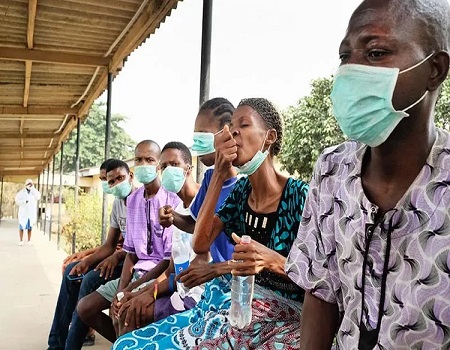 Oyo State government says 8,101 individuals tested positive for Tuberculosis in the state in 2020, even as the state now accounts for the 13th highest TB burden state within the country.

Oyo State Commissioner for Health, Dr Bashir Bello, flagging off a community outreach and motorized campaign on Tuberculosis for the year 2021 World TB day commemoration on Wednesday, said among the 51,731 individuals presumptively screen for TB in 2020, 327 also had TB and HIV co-infection.

Strategic stakeholders, including the World Health Organisation(WHO), Damien Foundation Belgium and Breakthrough Action-Nigeria (BA-N), partnered with the Ministry of Health for the exercise.

It also featured a motorized campaign from the Ministry of Health, Agodi Ibadan through Awolowo junction at Bodija, Housing corporation roundabouts, Elewure junction to Poly Junction at Sango and Eleyele roundabouts.

Dr Bello stated that Nigeria ranks the 6th among the 30 high TB burden countries and first in Africa, while Oyo State accounts for the 13th high TB burden states within the country, hence the need for aggressive awareness creation and case finding to end the scourge of TB in the state.

Dr Bello said individuals with persistent cough of two weeks or more should get screened for TB since its tests is free and if confirmed positive for TB, receive free treatment.

According to him, “there are 539 health facilities offering directly observed treatment for TB (DOT centres) and 10 Genexpert laboratories across the state where TB testing and treatment occur.”

Bello, while emphasizing health as an utmost priority to Oyo State government said individuals should be their brothers’ keeps by ensuring everyone access free community awareness screening presently ongoing across the 33 LGAs to reduce the TB burden in the state.

Mrs Toyin Afachang, state coordinator, Breakthrough Action-Nigeria, educating traders at the Sango Market, said the organization is currently working in 12 among the 33 local government areas in the state, saying that TB endemic areas in the 12 councils have been delineated and adequate steps were being taken to prevent and manage this infectious disease.

In spite of the huge investment in the water sector by the government and international organisations, water scarcity has grown to become a perennial nightmare for residents of Abeokuta, the Ogun State capital. This report x-rays the lives and experiences of residents in getting clean, potable and affordable water amidst the surge of COVID-19 cases in the state…8101 persons had TB  8101 persons had TB

The Lagos-Ibadan railway was inaugurated recently for a full paid operation by the Nigerian Railway Corporation after about a year of free test-run. Our reporter joined the train to and fro Lagos from Ibadan and tells his experience in this report…8101 persons had TB  8101 persons had TB